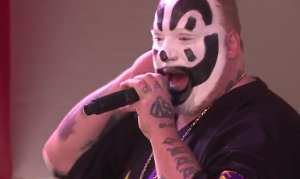 Saying they’ve been getting complaints from fans about police harassment, the Detroit hip-hop group Insane Clown Posse has hired counsel to pursue a possible lawsuit against the FBI for classifying its fan base as an emerging gang.

Over the weekend, the recording artists posted a statement at Juggalos Fight Back asking fans to report any incidents and promising that reports will be “reviewed by our legal team–at no charge to you.”

Insane Clown Posse’s Joseph Bruce (aka Violent J) and Joseph Utsler (aka Shaggy 2 Dope) told fans at its annual Gathering of the Juggalos that they and their label Psychopathic Records have asked lawyers to pursue possible legal action and even injunctive relief on behalf of fans, according to the New York Times.

The Times reports that fans of Insane Clown Posse call themselves Juggalos, who were described in a 2011 National Gang Threat Assessment report as “a loosely organized hybrid gang.”

Adding that the group is expanding in communities throughout the United States, the report says while much of the Juggalos’ activity is “sporadic” and “disorganized,” a small number are “forming more organized subsets and engaging in more gang-like criminal activity, like felony assaults, thefts, robberies and drug sale.” The report includes a photo of a “Juggalo member” donning greasepaint and pointing a gun at the camera.

“Although recognized as a gang in only four states, many Juggalos subsets exhibit gang-like behavior and engage in criminal activity and violence. Law enforcement officials in at least 21 states have identified criminal Juggalo sub-sets,” the report states.