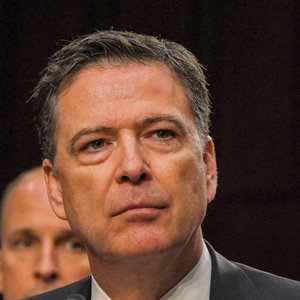 A report by the Justice Department’s inspector general criticizes former FBI director James Comey for his handling of the Hillary Clinton email investigation, but concludes bias did not influence the decision not to prosecute.

Comey is called “insubordinate” in the report and criticized for departing “clearly and dramatically” from FBI and DOJ norms when he decided he had the authority to make key decisions and speak for the Justice Department. The departure “negatively impacted the perception of the FBI and the department as fair administrators of justice,” the report says. The Washington Post, the New York Times and Bloomberg News had coverage in advance of the report’s public release. A press release is here.

In one exchange, Page wrote, Trump is “not ever going to become president, right? Right?!”

The inspector general said Strzok had prioritized the Russia investigation over the investigation of the newly discovered emails, and the decision may not have been free from bias. But the report didn’t cite evidence that he influenced the outcome of the investigation, according to the Times.

Comey had announced at a press conference in July 2016 that Hillary Clinton and her staff were “extremely careless” in handling the emails, but the FBI believed she should not be charged. In late October 2016, Comey told Congress he was reopening the probe because of newly found emails. On Nov. 6—just two days before the election—Comey said he had found nothing else that would warrant prosecution.

Comey did not communicate with Attorney General Loretta Lynch ahead of the announcements, the report says.

One reason Comey said he decided to make a unilateral statement was because of Lynch’s unplanned June 27 meeting on an airport tarmac with former President Bill Clinton, according to a report summary in the press release. He was also troubled by a request from Lynch that he call the investigation a “matter,” he said.

Lynch did not recuse herself from the Clinton investigation after receiving an ethics opinion that she didn’t need to do so. Lynch did say, however, that she would be accepting the FBI’s recommendations. Lynch’s “failure to recognize the appearance problem” created by the tarmac visit was “an error of judgment,” according to the press release summary.

The report said it found no evidence that Comey’s July 2016 statement was motivated by bias or an intent to influence the election. Nor was there any evidence that his letter to Congress about reopening the investigation was influenced by political preferences, the report said. The report made a similar conclusion regarding prosecutors.

“We found no evidence that the conclusions by department prosecutors were affected by bias or other improper considerations,” the report says. “Rather, we concluded that they were based on the prosecutor’s assessment of facts, the law, and past department practice.”

I respect the DOJ IG office, which is why I urged them to do this review. The conclusions are reasonable, even though I disagree with some. People of good faith can see an unprecedented situation differently. I pray no Director faces it again. Thanks to IG’s people for hard work.