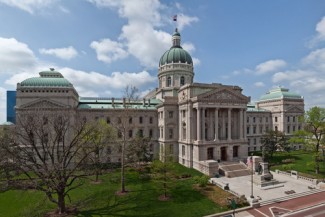 The Indiana Statehouse, which houses the Supreme Court of Indiana. Image from Shutterstock.

Pro se parties must “play by the rules,” and courts can place reasonable limits on filings by an “abusive litigant,” the Indiana Supreme Court wrote Tuesday in an opinion involving a man who has filed more than 120 lawsuits over the past six years.

The court did not impose sanctions on Gersh Zavodnik—an Indianapolis resident who reportedly made at least one filing with a 145-word title—but warned him that he could face fines and criminal charges if he files new lawsuits, the IndyStar reports.

As a sanction, the opinion states, courts can revoke an indigent person’s in forma pauperis status, which waives filing fees. And after considering a litigant’s history of abuse, courts can impose limits on the number of pages or words in a filing.

Courts can also limit the length of exhibits and attachments that accompany a filing, the opinion found, and require a litigant to clearly state the relief he or she requests at the beginning of a motion.

“Instruct the clerk to reject without return for correction future filings that do not strictly comply with applicable rules of procedure and conditions ordered by the court,” the opinion states.

Most of Zavodnik’s lawsuits center on Internet sales and purchases, the IndyStar reports. He’s also sued several Marion County judges, according to an earlier IndyStar article.

Zavodnik immigrated to the United States from Ukraine in 1987.

“I cannot go and beat people on the knees like they did back in Russia,” he told the paper. “These people stole from us. I come here for justice.”

In response to the Sept. 30 ruling, Zavodnik reportedly said that “Everything in that opinion is a lie.”

“This is a case that will be cited in other opinions for years to come,” Wuertz told the paper. “Gersh is not the only person that goes out there and does this crazy stuff.”