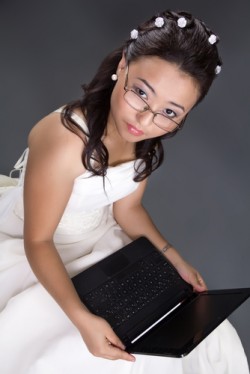 Online video connection services such as Skype and Google Hangout are spurring a trend: Internet marriages.

Members of immigrant communities are increasingly getting hitched to people overseas in video ceremonies, the New York Times reports. The legal arrangement, called a proxy marriage, occurs without the presence of one of the spouses.

The online marriages are often registered in another country. Most states don’t allow proxy marriages and when they do, most require one partner to be in the military, the story says. But foreign marriages are generally recognized if they are legally conducted abroad.

Will such marriages facilitate fraud by people seeking a route to U.S. citizenship? Officials from Homeland Security or the State Department interview people who apply for citizenship, and ask for details of the wedding, the Times says. Officials told the newspaper that an Internet marriage would raise a red flag. But the agencies do not specifically ask applicants whether they married by proxy.

Some critics fear such marriages will be used by human traffickers who bring women into the country and then force them into prostitution.

Michigan State University law professor Adam Candeub is among those expressing reservations. “Part of the reason for having the two people come and appear before a priest or a judge is to make sure it is a freely chosen thing,” he told the Times. “There are some problems with willy-nilly allowing anyone around the world to marry.”