Is chief justice another Souter? Not according to this study of 5-4 decisions 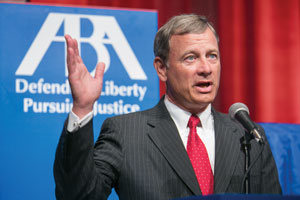 An ad by the Judicial Crisis Network that aired during the debate also attacked Roberts, running his image with those of Justice Anthony M. Kennedy and retired Justice David H. Souter. “We can’t afford more surprises,” the ad said.

The New York Times has a Sidebar article on the criticism, and supplies evidence that it is incorrect.

A study published earlier this year shows that Roberts is conservative when it counts, the story says. His votes in high profile cases reinforce that conclusion. Roberts voted with the majority to strike down restrictions on corporate campaign spending; to overturn the formula to determine states needing preclearance for voting changes; and to find an individual right to bear arms. And he voted with the dissent when the U.S. Supreme Court found a constitutional right to same-sex marriage.

Conservatives, however, are expressing disappointment because of Roberts’ two opinions on the Affordable Care Act. He rejected a constitutional challenge to the law in 2012 and read the law to allow subsidies for low-income people in all 50 states in a June opinion.

The study (sub. req.) in the January 2015 edition of the Journal of Legal Studies supplies some evidence that Roberts isn’t as conservative as some of his colleagues, the Sidebar article reports. The study found Roberts voted in a conservative direction 58 percent of the time in the last decade, compared to 61 to 65 percent of the time by Justices Samuel A. Alito Jr., Antonin Scalia and Clarence Thomas.

In 5-4 cases, however, Roberts was the most conservative justice, voting in a conservative direction 85 percent of the time. “He is a reliable conservative in the most closely contested cases but moderate when his vote cannot change the outcome,” the study’s authors wrote.

Updated at 12:24 p.m. to correct the name of one of the study participants, and to add a link to the study and the video of the ad.