Isidore Starr, known as the father of law-related education, dies at the age of 106 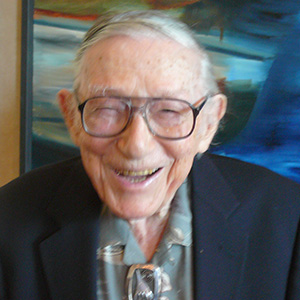 Isidore Starr, an educator and law grad who is known as the father of law-related education, died earlier this month at the age of 106.

“Isidore lived a very productive 106 years,” says Norman Gross, a former director of the ABA Division for Public Education. “He was known as the ‘father of law-related education’ for good reason.”

Starr brought social studies to life with legal issues and cases, challenging both teachers and students to reach a better understanding of the U.S. Constitution and laws, Gross said.

Starr not only developed an engaging, interactive method of teaching, he also created a national and international movement to include law in social studies. His educational content and methods are still being used, according to Margaret Fisher, a practitioner in residence at Seattle University School of Law.

“To answer how Isidore Starr influenced education is like answering how William Shakespeare influenced English literature,” she says.

Starr first began using the law to teach his civics students in 1934, when he was a teacher at Brooklyn Technical High School and also attending St. John’s University School of Law in the evening, according to a Legacy Washington profile.

The lesson plans, which promoted memorization and rote learning about government structure, “were deadly,” Starr recalled in the article and in this video. The first time he turned to the law in class, the lesson was supposed to be about the bureaus of the police department. He decided to lead the lesson by asking his students about the use of torture to gain confessions, an issue he had studied in law school.

Starr recalled telling his students: “Look, we create a police department to apprehend criminals. Then we handcuff them by saying, ‘You can’t torture them.’ Do you think that’s right?”

Isidore left teaching to serve in the Army during World War II and then returned to the high school classroom. Later he taught at Queens College.

Starr wrote a series of articles about using law to teach controversial issues, which were later compiled and published in a book. He also received an M.A. in American history from Columbia University and a Ph.D from the New School for Social Research.

The ABA Division for Public Education established an annual award in 1983 known as Isidore Starr Award for Excellence in Law-Related Education. Starr presented the award established in his name and participated in the division’s national conferences well into his 90s, according to Mabel McKinney-Browning, a former director of the division.

“Everyone always marveled at his expertise and sense of humor,” McKinney-Browning recalled. “Isidore often reminded audiences of the importance of the partnership between educators and lawyers in building programs to strengthen understanding of the rule of law and its critical role in our democratic republic.”

Gross says Starr served for decades as an informal adviser to the ABA in its efforts to educate the public about the law. “Today, his vision lives on through the ABA’s public education efforts and the many law-related education programs throughout the country,” Gross says.

Gross and others who knew Starr commented on his intellect, his mentoring and love of learning. Simon Fraser University education professor Wanda Cassidy says she was among the people mentored by Starr. “I continue to be inspired by Isidore’s ideas, and also by who he was—a compassionate, astute, insightful, inquisitive, humorous, and truly lovely human being,” she said.

In the Legacy Washington profile, Isidore said that education holds the key to the future, and people have to be educated that humanity “is a many-splendored thing” with “many views, many opinions, many ideas.”

Starr, the son of Russian immigrants, is survived by his son, Larry, along with three grandchildren and three great grandchildren, according to his obituary. His wife, Esther Kay Rubin, died in 2008.