Janet Reno dies at 78; she was the first female US attorney general 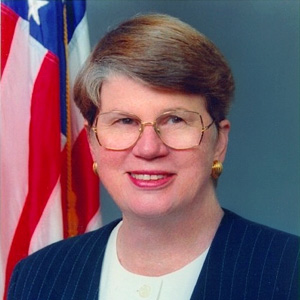 Former U.S. Attorney General Janet Reno died on Monday at the age of 78.

Reno, the first woman to serve as attorney general, died of complications from Parkinson’s disease, report the New York Times, the Washington Post and the National Law Journal (sub. req.).

in a statement expressing condolences, ABA President Linda Klein said Reno was a longtime member of the ABA who had served on several important commissions and task forces.

Klein said Reno served as attorney general from 1993 to 2001 and was the longest-tenured attorney general of the 20th century. “But her contributions to the legal community go beyond those years,” Klein said. “She was a dogged prosecutor who believed equally in the conviction of the guilty but also the protection for the innocent with strict adherence to the rule of law.”

Reno had served as the state’s attorney in Dade County, Florida, before becoming attorney general in 1993. Afterward, she ran for Florida governor and lost in the primary.

Several controversies emerged during Reno’s service as attorney general. She authorized the 1993 raid on the Waco compound of the Branch Davidians that claimed the lives about 75 people who lived there. In another controversial action in 2000, she ordered federal agents to seize 6-year-old Elian Gonzalez after a federal judge ordered his return to Cuba. She was also criticized for authorizing an independent counsel to expand the Whitewater inquiry to include President Clinton’s relationship with Monica Lewinsky.

According to the Washington Post, Reno “brought a fierce independence to her job. From the FBI siege of the Branch Davidian compound in Texas to the investigation into Clinton’s sexual relationship with intern Monica Lewinsky, she was adamant that her prosecutors and agents work outside the influence of politics, media or popular opinion.”

Klein noted that Reno had fought for the legal rights of children and believed that lawyers should fight for social good. “Her dedication and leadership will be missed,” Klein said.

Duke University law professor Walter Dellinger was solicitor general when Reno was attorney general. “She was a very powerful force for lawfulness,” he told the Washington Post. “She was always challenging to make sure there was a sound legal basis for what people were doing. And she was adamant about separating the department from politics.”

Former Attorney General Eric Holder released a statement calling Reno “my colleague, my inspiration and my dear friend.” He was deputy attorney general in the Clinton administration.

“She was a strong leader who was unaffected by her physical limitations and who cared deeply about those who were too often neglected and marginalized by our society,” Holder said. “As our first female attorney general she put innumerable cracks in an unjust and unwise glass ceiling. She was in the vanguard of those women who endured much and helped make possible the gender progress that our nation has long needed.”

Previous:
Does president's pardon authority extend to a self-pardon?

Next:
FBI director sticks to his original conclusion after new email review: Clinton shouldn't be charged