Jaywalker handcuffed and put in police car was not arrested, city says in response to his civil suit 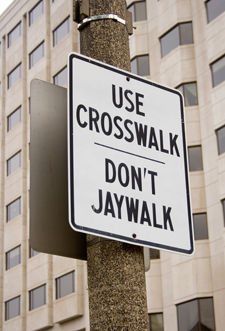 Stopped by a police offer in 2010 as he was admittedly jaywalking across a Portland, Ore., street, Scott Miller was handcuffed, placed in the back of a squad car and told he was under arrest.

But he wasn’t actually arrested, the city is now contending in response to the federal lawsuit he has filed over the incident, because “objective facts” show he was merely detained, reports the Oregonian.

Miller was only detained about half an hour, handcuffed for less than 10 minutes and wound up about a block from his original location, the city says. He is seeking damages for his alleged wrongful arrest and a claim of excessive force, based in part on his contention that the officer grabbed his arm and knocked him to the ground after stopping him for jaywalking.

A police report says he was arrested because he didn’t immediately produce identification, but no law requires an individual to do so, the newspaper says. Jaywalking is a violation that does not permit an individual to be sentenced to jail.