Joe Biden says he owes an apology to Anita Hill

Former Vice President Joe Biden says he believed Anita Hill’s accusations of sexual harassment against Clarence Thomas during the justice’s confirmation hearing, and would have handled some things differently if he could do it over again.

Biden was Senate Judiciary Committee chairman in 1991 when Hill testified about the alleged harassment by Thomas when she worked for him at the U.S. Department of Education and the Equal Employment Opportunity Commission. Biden reflected on the hearing in an interview with Teen Vogue, noted by the Washington Post here and here.

“My one regret is that I wasn’t able to tone down the attacks on her by some of my Republican friends,” Biden said. “I mean, they really went after her. As much as I tried to intervene, I did not have the power to gavel them out of order. I tried to be like a judge and only allow a question that would be relevant to ask.”

“I wish I had been able to do more for Anita Hill. I owe her an apology.”

Biden said he wasn’t able to persuade three women to testify against Thomas after they changed their minds about appearing at the last minute. “In retrospect, some, including Anita, think I should have subpoenaed them no matter what,” he said. Biden voted against Thomas, who was confirmed 52-48. 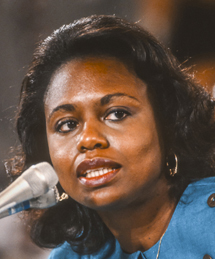 Anita Hill during the 1991
confirmation hearing for Clarence
Thomas./Shutterstock.com.

Thomas had denied the allegations and said the hearing was a “high-tech lynching for uppity blacks.” Then-Republican Sen. Arlen Specter of Pennsylvania had questioned why a seasoned lawyer like Hill had not taken notes on the incidents and if Hill had political motivations.

According to the Post, Hill and her defenders blame Biden “for setting an accusing, skeptical tone” and losing control of the hearing. Women’s rights advocates say Biden should have called expert witnesses to testify about the pressure women feel to keep harassment a secret.

In an interview with the Post, Hill said Biden “was not controlling what was going on. So it was worse than being put on trial, because in a trial you’ve got legal protections. In the hearing, there was none of that.”

“You cannot just bring people forward into a process where you know they’re not going to be treated fairly,” Hill said. “That’s not being heard. That’s something that we are struggling with right now. Women are coming in to make a complaint, and the process is unfair and employers are saying, ‘Well, we have a process.’ Well, that’s not enough.”

Hill is a professor of legal history and public policy at Brandeis University in Massachusetts.