Retired Justice John Paul Stevens called for a “national solution” the the death penalty. All photos by ©Kathy Anderson.

In 2014, retired U.S. Supreme Court Justice John Paul Stevens published Six Amendments: How and Why We Should Change the Constitution. And in a short but punchy speech to a luncheon held Friday during the 2015 ABA Annual Meeting in Chicago, Stevens praised the current justices for taking positive steps in the direction of implementing at least some of his recommendations. 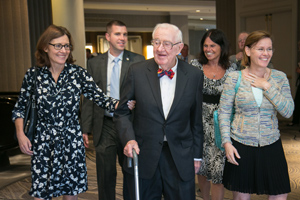 Stevens cited the majority opinion that Roberts wrote in King v. Burwell, the second major decision in the past two terms that upheld key portions of the Affordable Care Act. In his opinion, Roberts avoided the temptation to focus on the specific language used by Congress in permitting federal tax subsidies available in 36 states to individuals obtaining insurance under the act. “The chief was dead right in focusing on the intent of Congress,” said Stevens, “even though the provision was awkwardly drafted.” 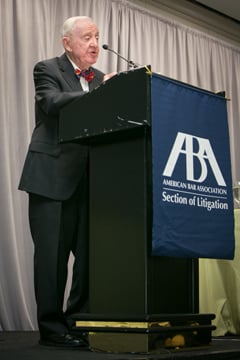 The high court’s decision upholding the right of voters to strip legislators of their authority to draw up district voting lines and its ruling that same-sex marriage is protected by the Constitution both were in accord with Stevens’ ideas on how the Constitution can be improved. Stevens described the Supreme Court’s ruling in favor of same-sex marriage as the most important decision of the 2015 term. The “right to marry, like the right to abortion, fits squarely with the liberties protected by the due process clause of the 14th Amendment,” Stevens said, unlike the right to bear arms under the Second Amendment, which he said should not be protected under due process. In his book, Stevens proposes amending the Second Amendment to limit the right to bear arms to those “serving in the militia.”

In a short acceptance speech, she cited improvements in Guatemala’s justice system during her term as attorney general that ended last year. “What makes me most proud,” she said, “was that we were able to achieve these results with absolute respect for the rule of law and human rights. The fight for human rights has no borders, and every lawyer has an obligation to fight to uphold the rule of law.”