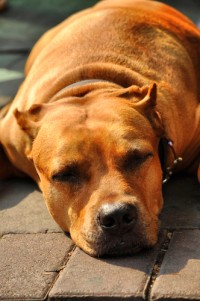 A Georgia judge has ordered a lawyer to represent a pit bull facing euthanasia after an attack on a 5-year-old boy that required two surgeries.

It doesn’t appear from the article that Kicklighter requested the appointment, and his law firm website doesn’t indicate that he specializes in animal law matters. He did not immediately respond to a phone message from the ABA Journal seeking further details about Kno’s case, but told Reuters: “All I can tell you is that the judge appointed me. I really don’t know what the issues are.”

Kicklighter reportedly won’t be charging the county for his legal work.

Attorney Bruce Wagman, a San Francisco practitioner who specializes in animal cases, tells the news agency he knows of only two other cases in which a judge has appointed a lawyer to represent an animal. One involved dogs owned by NFL quarterback Michael Vick, who was criminally convicted in 2007 for his involvement in an interstate dog-fighting venture.

The Savannah Morning News says Kno was surrendered to the Effingham County Animal Shelter on the day of the attack, July 24, and has been classified as a dangerous animal by a county magistrate. A letter was sent to his owner, Larry A. Long Jr., but it didn’t make clear that the county is seeking to put the dog down. So the county petitioned for a court ruling that Kno should be euthanized.

Woodrum also appointed Kicklighter to represent Long at the Oct. 25 hearing that has been set. However, it isn’t clear whether Long plans to participate, since he has reportedly already surrendered Kno to the county.

The county took the position that no attorney is needed at the hearing to represent either Kno or Long, and says the pit bull clearly needs to be put down.

“There has to be a lesson for dog owners and for people not to allow their children to go to other people’s houses with dogs,” said Romie Currier, the county’s director of animal control.

Kno’s reported attack on Wesley Frye took place as the 5-year-old was visiting a playmate in a neighbor’s home in a Rincon subdivision.

Reports by WSAV and WTOC at the time of the attack indicated the dog lived in the neighbor’s home but quoted law enforcement officials as saying that the circumstances leading to the attack were unknown.

Updated at 11:45 a.m. to include information from Reuters.