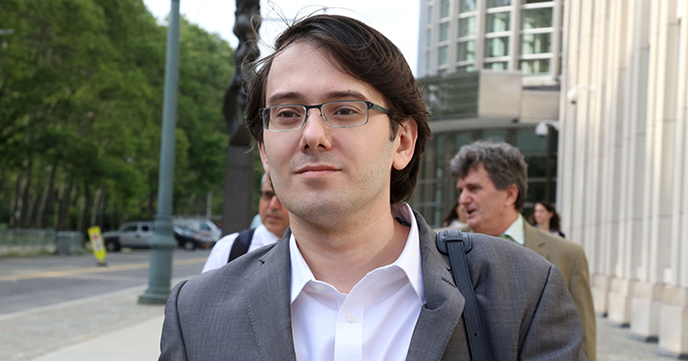 A federal judge in Brooklyn, New York, sentenced a tearful Martin Shkreli to seven years in prison for securities fraud Friday after he told the court he was there because of his “gross, stupid and negligent mistakes.”

U.S. District Judge Kiyo Matsumoto told the former drug company CEO he had minimized his conduct and engaged in an “egregious multitude of lies,” the New York Times reports. The Associated Press and the Washington Post also covered the sentencing.

Shkreli was convicted in August for misleading investors and for using proceeds from his publicly traded drug company, Retrophin, to pay back investors who lost money in his hedge funds.

During the trial, Shkreli had told courthouse journalists that the Brooklyn federal prosecutors were “junior varsity” to Manhattan prosecutors, and that his critics “blame me for capitalism.”

A submission from a defense consultant said Shkreli had been physically abused by his parents and witnessed domestic abuse at his home. The court was also told that Shkreli had been teaching math and chess to inmates in jail, where he was being held after his bond was revoked for offering $5,000 for a hair from Hillary Clinton.

On Monday, Matsumoto ordered Shkreli to forfeit $7.36 million in connection with his conviction, and said the money could be raised from “substitute assets” that included a one-of-a-kind album by hip-hop group Wu-Tang Clan.

Also convicted in the case was former BigLaw partner Evan Greebel, who was accused of helping Shkreli transfer Retrophin assets to investors. Greebel, a former income partner at Katten Muchin Rosenman, was convicted for conspiracy to commit wire and securities fraud.