Judge is shot outside courthouse; he and a probation officer fired back at the suspect 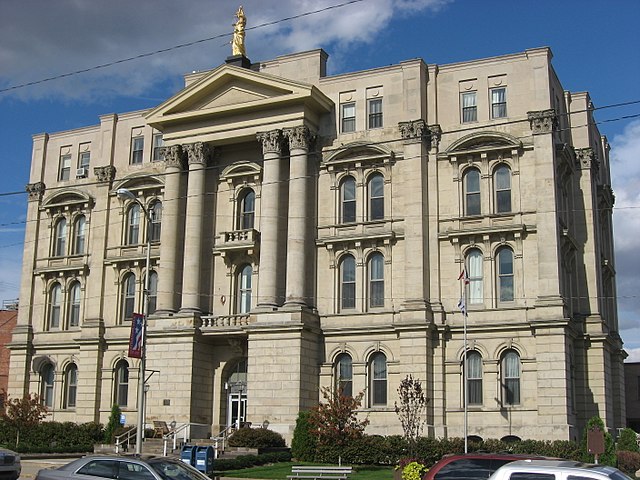 Jefferson County Courthouse in Steubenville, Ohio. Photo by by Murderbike, via Wikimedia Commons.

An Ohio judge is hospitalized after returning fire at the man who shot him Monday morning outside a courthouse in Steubenville.

The judge, Joseph Bruzzese, and a court probation officer both fired at the suspect, report the Steubenville Herald-Star, the Washington Post, the Associated Press and NBC News. The suspect died. Bruzzese was flown to a Pittsburgh hospital, where he underwent surgery and is “doing fine,” Steubenville city manager Jim Mavromatis told the Herald-Star.

Jefferson County Sheriff Fred Abdalla said at a press conference that the probation officer fired the shots that killed the alleged shooter, whose name has not been released. A passenger in the suspect’s car was grazed by a ricocheted bullet and taken to the hospital. The passenger told police he had been drinking with the suspect, who said he needed to go to court. The passenger said he didn’t know a shooting was planned.

Bruzzese worked in the general and domestic relations division of the court. He parks his car in a reserved spot for judges and was walking down the “courthouse alley” between the lot and the building’s side entrance when he was shot.

Abdalla said Bruzzese was an avid hunter and helped fight off the attacker, but it was the probation officer who made the difference, according to the Herald-Star coverage. Abdalla said it wasn’t clear whether Bruzzese’s bullets hit the attacker.

“Every judge should be armed today in America,” Abdalla said. “Prosecutors need to be armed. It was a cold-blooded attempted murder on a judge.”