Judge is suspended for campaign ad that was 'in every sense, materially false' 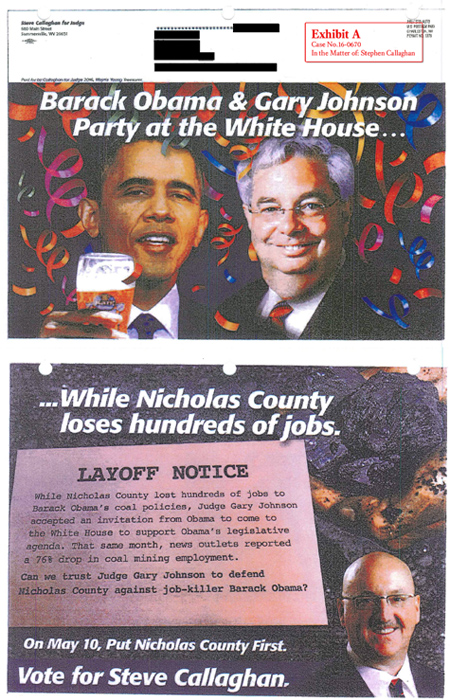 The campaign flier at issue, from the court documents.

A West Virginia judge has been suspended for two years and fined $15,000 for a campaign flier purporting to show his election opponent partying with President Barack Obama.

The Supreme Court of Appeals of West Virginia imposed the unpaid suspension against Judge Stephen Callaghan of Nicholas County in a Feb. 9 opinion (PDF), report the Charleston Gazette-Mail, the West Virginia Record, Metro News and the State Journal. The ad is included at the end of the opinion.

The incumbent depicted in Callaghan’s flier, Gary Johnson, had visited the White House for a federally required conference on fighting child trafficking. But he didn’t see Obama there, and there was no party and no function involving alcohol. The flier mailed out five days before the May 2016 election was “in every sense, materially false,” according to the decision. Callaghan won the election by 220 votes.

The flier placed digitally altered photos of Obama and Johnson next to each other. Obama was holding a beer and streamers were in the background. The caption read “Barack Obama & Gary Johnson Party at the White House.” The opposite side of the flier read, “While Nicholas County lost hundreds of jobs to Barack Obama’s coal policies, Judge Gary Johnson accepted an invitation from Obama to come to the White House to support Obama’s legislative agenda. That same month, news outlets reported a 76% drop in coal mining employment. Can we trust Judge Gary Johnson to defend Nicholas County against job-killer Barack Obama?”

After Johnson objected, Callaghan removed the flier from his Facebook pages and ran radio ads saying the flier’s “specific characterization of the White House visit may be inaccurate and misleading,” and “candidate Callaghan apologizes for any misunderstanding or inaccuracies.”

The case was heard by a retired supreme court justice and four circuit judges after the entire court recused itself. The court recused because it had hired Johnson as Supreme Court administrator.

Callaghan has argued the flier was rhetorical hyperbole or parody, and was not intended to be taken literally. Callaghan has filed a federal lawsuit contending that the disciplinary case violated his First Amendment rights. The federal court had put Callaghan’s suit on hold until the state court ruled.

Callaghan also made the First Amendment argument in the disciplinary case. The Supreme Court of Appeals said bans on knowing or reckless false statements by judicial candidates “have been universally upheld” and the ban was not unconstitutional as applied to Callaghan’s case.

The court also rejected Callaghan’s argument that the flier’s statements were substantially true. “Judge Johnson’s attendance at the meeting and conference is exaggerated, repurposed and mischaracterized to the point that it is rendered patently untrue,” the court said.