Judge Kopf: I would uphold the death penalty for an innocent man rather than play games with the law 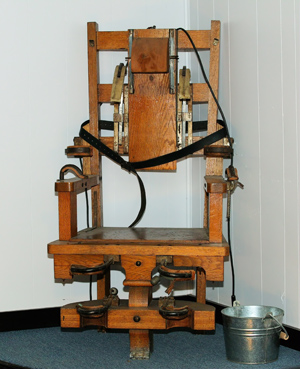 A blogging federal judge has taken on a controversial question: Should federal court judges allow the execution of a factually innocent defendant?

Writing at Hercules and the Umpire, U.S. District Judge Richard Kopf says he accepted the risk of condemning an innocent to die when he became a federal judge in 1992. “I will have to live with my knowing choice if such a horror comes to pass,” the Nebraska judge writes. “I will have no one to blame but myself.”

Kopf says he has never had a death penalty case where he believed a defendant was factually innocent and he doesn’t know what he would do if confronted with such a case. “However, I do know this: I would move heaven and earth to stop the execution, but I would not play games with the law to do so,” Kopf says.

He goes on to elaborate on three situations in which he would probably uphold the death penalty for a petitioner who is factually innocent of murder but has no federal legal remedy available to stop the execution.

The first: When precedent compels such a result. “For example,” he says, “should the Supreme Court hold that factual innocence is not cognizable as a ‘stand alone,’ federal claim, I would follow that precedent.”

The second: When he knows the petitioner could resort to a fair and speedy pardon process before the execution.

The third: When the petitioner “sat on his rights” and contributed to the absence of a legal remedy to address factual innocence.

Kopf’s blog post followed a Salon article about a 1994 opinion by Justice Anton Scalia taking Justice Harry Blackmun to task for stating he would no longer “tinker with the machinery of death.” Scalia said Blackmun had taken his stand in “one of the less brutal of the murders that regularly come before us,” and in any event, death by lethal injection is less brutal than murder.

Scalia offered one of the more brutal cases as an example: “the case of the 11-year-old girl raped by four men and then killed by stuffing her panties down her throat. How enviable a quiet death by lethal injection compared with that!”

The issue, the Salon article says, was with the case Scalia was citing, in which two mentally disabled North Carolina half-brothers confessed to the girl’s 1983 rape and murder. Earlier this month, a judge declared the two men were innocent and ordered their release from prison, 30 years after their convictions. DNA evidence on a cigarette butt left at the murder scene had implicated another man imprisoned for a similar rape and murder that occurred about the same time.

The Salon writer, Helen Digby Parton, quoted a Scalia dissent in which he said the Supreme Court has left unresolved the question of whether the Constitution bars the execution of a defendant who manages to persuade a habeas court that he is actually innocent, despite a full and fair trial. Parton judges Scalia to be a “depraved person” and asks how he can be on the U.S. Supreme Court.

In an earlier blog post, Kopf calls the Salon story “nastily florid”; questions Parton’s qualifications for judging Scalia; and says the author recently received a writing award from a group of “unreconstructed lefties,” using the wording of one of Parton’s supporters. (Parton was awarded the 2014 Hillman Prize for Opinion and Analysis Journalism.)

Updated on Sept. 16 to state that Kopf’s reference to Parton’s writing award from “unreconstructed lefties” used the wording of one of her supporters.