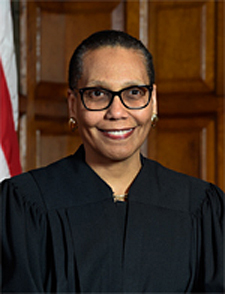 Updated and corrected: Judge Sheila Abdus-Salaam of the New York Court of Appeals was found dead Wednesday afternoon in the Hudson River after her husband had reported her missing.

Abdus-Salaam, 65, was the first female African-American to serve on New York’s top court, the New York Times reports. Several other publications have stories, including the Washington Post, the New York Daily News and the New York Law Journal (sub. req.).

Police reported no signs of trauma on the judge’s body and are treating the death as a suicide, according to the Times. The investigation was continuing, however.

Initial reports said Abdus-Salaam was the first female Muslim judge in the United States, but the New York Times is now quoting a court spokesperson who says she told him she is not Muslim. Her husband, whom she married about eight months ago, is an Episcopal pastor.

Abdus-Salam became a lower court judge in 1994. She went on to become a judge on an intermediate appeals court before she joined the state’s top court in 2013.

“Her personal warmth, uncompromising sense of fairness, and bright legal mind were an inspiration to all of us who had the good fortune to know her,” Chief Judge Janet DiFiore said in a statement. “Sheila’s smile could light up the darkest room.”

The Times describes Abdus-Salaam as “among the most reliable and steadfast liberal voices” on the Court of Appeals.

She grew up in a working-class family and first worked as a public defender before graduating from Columbia law school in 1977. Former Attorney General Eric Holder was a law school classmate, and said at the judge’s swearing-in ceremony in 2013 that “she never forgot where she came from.”

“There was a seriousness about her, a strong sense of purpose at a relatively young age,” Holder said.

After working as a public defender, Abdus-Salam’s next job was in the civil rights bureau of the New York Attorney General’s office. She also worked in the city’s law department and office of labor services.

New York Gov. Andrew Cuomo had nominated Abdus-Salam to the top court. “Sheila Abdus-Salaam was a trailblazing jurist whose life in public service was in pursuit of a more fair and more just New York for all,” he said in a statement. “As the first African-American woman to be appointed to the State’s Court of Appeals, she was a pioneer. Through her writings, her wisdom, and her unshakable moral compass, she was a force for good whose legacy will be felt for years to come.”

Updated at 12:19 p.m. to report that police were treating the death as a suicide. Corrected on April 14 to report that a court spokesman said Abdus-Salam told him she was not Muslim.