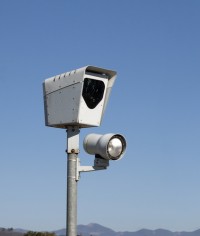 A Hamilton County (Cincinnati) judge slammed the tiny village of Elmwood Place and the company it uses to issue camera-caught speeding tickets, in effect saying they ran right through his judicial STOP sign.

County Common Pleas Court Judge Robert Ruehlman had ruled back in March that using cameras to ticket speeders without pulling them over was unconstitutional, the Cincinnati Enquirer reported. The setup had poured more than $1 million into the coffers of Elmwood Place, population 2,200. The judge said stop.

The ticketing continued. Judge Ruehlman cited both the village and Optotraffic, a Maryland-based speed enforcement company, for contempt. He also ordered that the cameras be seized.

If the parties repay the $48,500 collected since his March order, he’ll drop the contempt charges.

Despite positive statistics touted by auto insurers—they say these devices result in significant deterrence—there is a growing backlash against automated traffic-law enforcement.

As of February, more than 100 legislative bills were filed in 22 states to curtail use of traffic cameras, reports the Stateline daily news service of the Pew Charitable trusts.