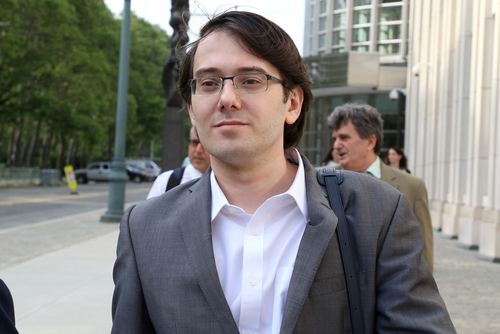 U.S. District Judge Kiyo Matsumoto said Shkreli has to “stop talking in the courthouse and around the perimeter of the courthouse,” report the Washington Post and CNBC.

On Monday, federal prosecutors had asked Matsumoto to order Shkreli to keep quiet or to consider partly sequestering jurors to keep them from hearing his criticism of the case, the New York Times reported.

The request followed Shkreli’s impromptu visit with courthouse journalists on Friday in which he said that the Brooklyn federal prosecutors were “junior varsity” to Manhattan prosecutors, that a prosecution witness was not a “victim,” and that his critics “blame me for capitalism.”

Shkreli is accused of using money from Retrophin, the publicly traded drug company he founded, to pay investors who lost money in two of his hedge funds. He was in the news in connection with his leadership of another drug company, Turing Pharmaceuticals, when hiked the price of its lifesaving drug Daraprim by more than 5,400 percent from $13.50 to $750 per pill.

Also charged in the case is former BigLaw partner Evan Greebel, who has pleaded not guilty, USA Today reports. Greebel had obtained a separate trial after arguing that Shkreli was likely to try to “turn this trial into a circus as part of a deliberate strategy to obtain jury nullification rather than have the jury focus on and carefully consider the evidence.”