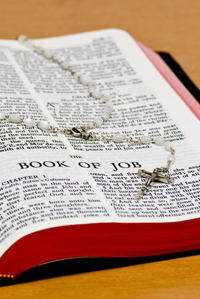 A South Carolina judge has ordered a DUI defendant to read and write a summary of the Old Testament book of Job.

Judge Michael Nettles also sentenced 28-year-old Cassandra Tolley to eight years in prison after she pleaded guilty in a drunk-driving crash that seriously injured two people, according to the Rock Hill Herald. During the hearing on her guilty plea, Tolley told the court she is a Christian.

Tolley said she turned to alcohol after being physically abused as a child by a relative. When she was 11, Tolley suffered burns when the relative poured gasoline on her and set her on fire.

Tolley’s public defendar, Amy Sikora, says her client is thankful for the assignment and has already started working on it, the story says. Tolley’s pastor said he thinks the judge picked the book of Job to send Tolley a message that she can make it through her troubles.

University of South Carolina law professor Kenneth Gaines told the publication the writing assignment isn’t an issue as long as Tolley is in entire agreement with it.