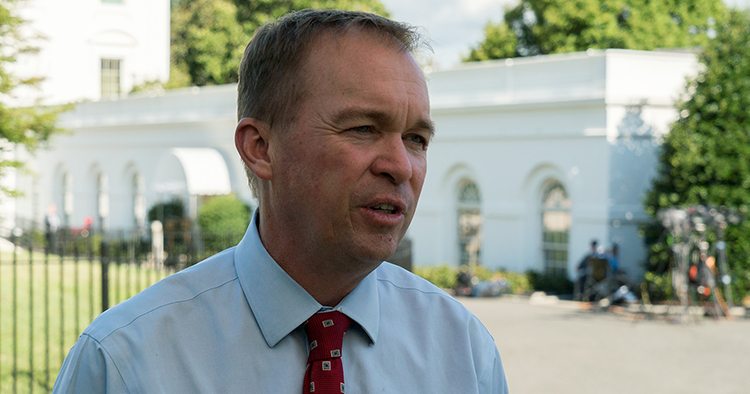 A federal judge in Washington, D.C., has refused to block President Donald Trump’s appointment of an acting director to lead the Consumer Financial Protection Bureau.

Trump had appointed Mick Mulvaney, director of the Office of Management and Budget, as acting CFPB director. English had argued in a lawsuit filed Sunday evening that she was the rightful acting director after the resignation of Richard Cordray. Both had claimed they were running the agency; Mulvaney had announced a temporary freeze on hiring and new regulations.

In a ruling from the bench, Kelly agreed with government lawyers who argued the president has the authority to appoint the acting director under the Federal Vacancies Reform Act, according to the National Law Journal account. “On its face, the Vacancies Reform Act does appear to apply to this situation,” Kelly said.

Denying the president’s authority to make the appointment would raise “significant constitutional questions,” Kelly said, according to the USA Today account. Kelly, a Trump appointee who was said nothing in the statute prevents Mulvaney from holding both government jobs overseeing the CFPB and the Office of Management and Budget.

English had pointed to a section of the Dodd-Frank Act that says the deputy director “shall serve as acting director in the absence or unavailability of the director,” the New York Times explains. Her suit said she is acting director of the CFPB until a new permanent director is appointed by the president and confirmed by the Senate.

The Justice Department’s Office of Legal Counsel said in a opinion that the Dodd-Frank Act doesn’t displace the president’s authority to appoint under the Vacancies Reform Act, which authorizes the president to temporarily authorize an acting director of an executive agency whose leader is subject to Senate confirmation. The law allows the president to appoint someone other than the deputy director in an acting capacity if that person has been confirmed by the Senate to another government position.

It’s unclear if an immediate appeal is available at this stage of the case, according to BuzzFeed. English’s lawyer, Deepak Gupta, said they are considering whether to appeal now or wait for a more definitive ruling.

Updated Nov. 29 to note that Kelly is a Trump appointee.