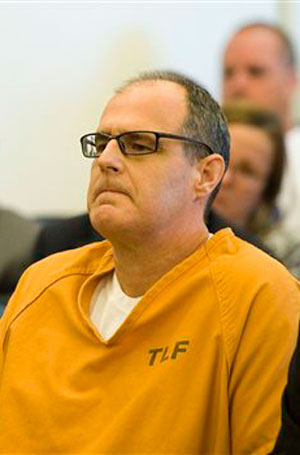 The worst mass killer in the history of Orange County, California, will not get the death penalty because of systemic misconduct by the district attorney’s office and sheriff’s department, a judge ruled Friday morning.

The Orange County Register, OC Weekly and Southern California Public Radio say Judge Thomas Goethals removed capital punishment as an option because “the prosecution team is unable or unwilling” to provide the evidence allowing confessed mass murderer Scott Dekraai a fair trial. The Register said Goethals signaled that he would sentence Dekraai Sept. 22 to eight consecutive life sentences, one for each of the people he killed.

Speaking about Dekraai, Goethals said in open court: “I hope he dies a forgotten man in some obscure maximum prison.”

The ruling is the result of years of hearings investigating whether the Orange County Sheriff’s Department, which runs the jails, has been systematically violating defendants’ constitutional rights. Public defender Scott Sanders, who was appointed to represent Dekraai, noticed that an informant against Dekraai was the same informant used in another case Sanders was handling. According to a 505-page brief Sanders subsequently filed in 2014, his subsequent research showed that the Sheriff’s Department had for years been planting jailhouse informants next to high-value defendants already represented by counsel.

If true, that practice would violate the defendants’ right to counsel under a U.S. Supreme Court decision called Massiah v. United States. And because prosecutors had not been turning over information on the subject—often denying that the information existed—they could be in violation of their obligation to turn over all material discoverable evidence under Brady v. Maryland.

Sanders argued in his 2014 brief that this evidence should take the death penalty off the table. (There is no question about Dekraai’s guilt; he confessed within an hour of the massacre and has since pleaded guilty.) Goethals didn’t agree at the time, but he held evidentiary hearings that eventually led him to recuse the entire Orange County District Attorney’s office from the case. The California Attorney General’s office inherited the case and appealed the recusal; the appeal was rejected last November by a California appeals court.

However, as the case continued, Goethals appeared to become frustrated by the slow pace of discovery, in part because the Sheriff’s Department kept finding more discoverable documents it hadn’t turned over. Members of the department testified that there was no jailhouse informant program and therefore there were no records to turn over. Those records were later turned over, and several deputies invoked their Fifth Amendment rights when asked about related matters in court.

The murders took place in 2011, when Dekraai was angry at his ex-wife, Michelle Fournier, about a child custody dispute. So Dekraai went to the beauty salon where she worked, shot a man sitting in a car outside and then massacred the people inside. In addition to Fournier, 48, the victims were Victoria Buzzo, 54; David Caouette, 64; Randy Lee Fannin, 62; Michele Daschbach Fast, 47; Lucia Bernice Kondas, 65; Laura Webb Elody, 46; and Christy Lynn Wilson, 47. Hattie Stretz, who was a customer at the salon and the mother of one of the victims, survived.

Fournier’s and Dekraai’s son was placed in the custody of Fournier’s adult daughter.

Families of the victims differed on their support for the death penalty for Dekraai, the OC Register reported, but at least two expressed relief that the six-year case had come to a resolution. One urged the state attorney general’s office not to appeal the ruling; deputy AG Michael Murphy indicated an appeal was possible.

At least one investigation into the misconduct, by the U.S. Department of Justice, is still underway.

The case has roiled the Orange County legal community. As the ABA Journal reported in 2016, Goethals faced a backlash from some local prosecutors who began filing requests to take him off murder cases, a practice an appeals court later said was legal. The allegations about illegal informant use have resulted in dismissals, resentencings or new trials in multiple criminal cases. Some of the new sentences are very lenient; one man convicted of murder was sentenced to four years of time served for one murder (downgraded to manslaughter) and had another murder charge dismissed.