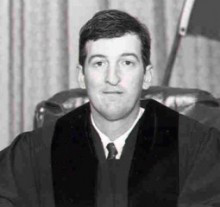 An Arkansas judge has been permanently removed from the bench over online comments he made under a “geauxjudge” pseudonym, including discussion of a confidential adoption of a child by actress Charlize Theron.

Now-former Faulkner County Circuit Judge Mike Maggio did not personally oversee the 2012 adoption case, but it was handled in the court division in which he served.

Maggio agreed with the Arkansas Judicial Discipline and Disability Commission about the lifetime ban imposed Thursday. However, the Arkansas Supreme Court rejected a commission recommendation that Maggio be suspended with pay until the end of the year when his term expires, reports the Associated Press.

“We deem any further suspension with pay to be inappropriate,” said the supreme court in its Thursday opinion (PDF). “Therefore, we order the removal of Judge Maggio from judicial office, effective as the date of this opinion. By this order, Judge Maggio is henceforth prohibited from holding any judicial office in the state of Arkansas.”

In a written statement (PDF) last month after the commission released its report and recommendation (PDF), Maggio said he treated everyone with whom he interacted as a judge fairly and with respect.

“I have always done my utmost best to attain and promote the highest ideals of the justice system,” he wrote. “I accepted responsibility and apologized for the statements under an assumed pseudonym in a private sports blog that were attributed to me. Those people that know me, have interacted with me or have observed me in private or public know those statements do not, have not, nor ever will represent my beliefs, core principals, philosophy or my heart.

“I am proud of my service to my constituents, litigants, lawyers and all with whom I interacted,” his statement continues. “It was my hope and desire that I would finish serving them in my elected capacity. I, along with my staff, treated all with courtesy, respect and dignity. In none of the over 45,000 cases was there a single instance of any bias or prejudice in my actions, decisions or words.”

Maggio’s lawyer did not immediately respond to a request for comment by the AP following his removal from the bench.