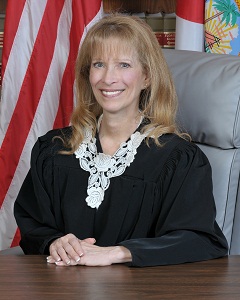 A Florida judge has been banned from the bench in advance of her planned June 30 retirement after berating a woman struggling to breathe while in a wheelchair.

Chief Judge Jack Tuter of Broward County said Saturday that Judge Merrilee Ehrlich had planned to retire before the incident, and he is telling her not to return to the courthouse. He also said he planned to contact the woman’s family to apologize.

A video of Ehrlich shows her erupting in anger as Twiggs tries to answer her questions. Twiggs was accused of scratching her 19-year-old daughter in an argument over a fan.

“You’ve already said too much,” Ehrlich yelled at one point during the April 15 hearing. “Listen to me!”

The judge also shows impatience in a hearing that followed, telling a sobbing woman, “Don’t talk! You have an attorney here talking for you!”

Broward County Public Defender Howard Finkelstein wrote to the chief judge saying that Ehrlich had “demonstrated aggressive and tyrannical behavior and revealed her lack of emotional fitness to sit on the bench.” He also said Ehrlich’s behavior was shocking, and an embarrassment to Broward County.”

Twiggs’ goddaughter, Carolyn Porter, told the Sun Sentinel that Twiggs had tried to explain how Ehrlich treated her, “but she had anxiety, and every time she tried to talk about it, she couldn’t breathe.”

‘Common good originalism’ is neither originalist nor a good way to judge, essay says