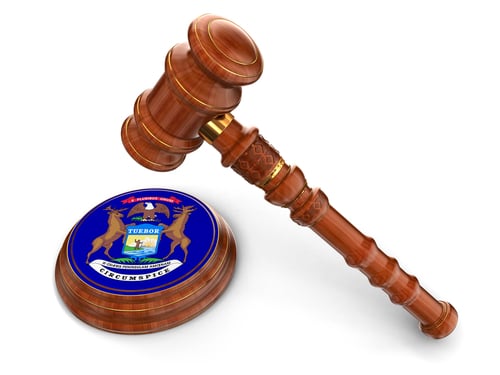 A judicial candidate in Michigan has been charged with misdemeanor domestic assault after an office worker recorded him removing his belt and swinging it multiple times toward his girlfriend while in his Muskegon, Michigan, apartment.

Jason Kolkema was charged after the office worker posted the video on Facebook and then turned it over to police, the Detroit Free Press reports in a story published by USA Today.

The Associated Press and Michigan Radio summarized the story.

The video appears to show the belt striking the girlfriend. But Kolkema’s lawyer and his girlfriend have said Kolkema was actually hitting a chair during the Aug. 18 incident.

When police arrived in response to a call by one of the witnesses, they said the woman was “visibly upset,” but she wouldn’t comment on what had happened.

Kolkema received 36% of the vote in the August primary election, the highest percentage among four candidates. He faces the next highest vote-getter Nov. 8. His trial is scheduled for later that month.

The girlfriend told the Detroit Free Press that Kolkema hit the armrest of a chair with the belt after he couldn’t get her attention to finish a conversation. She didn’t respond because she was on a headset and distracted.

“It was rude of me to ignore him, so I do take responsibility for that part,” she told the Detroit Free Press.

She said Kolkema was not dangerous and did not beat her. He is “just boisterous, animated—almost bouncy at times,” she said.

Kolkema said on his Facebook page “the optics are bad,” but “the facts will be revealed in due time.”

The prosecutor who charged Kolkema told the Detroit Free Press that the lawyer could be convicted, even if he hit a chair.

“Domestic violence includes violence that can either be physical or threatened. Contact is not required,” said Muskegon County Prosecutor D.J. Hilson.

The Detroit Free Press examined court and police records related to Kolkema. Three months before the belt incident, the girlfriend called police and said Kolkema slapped her, but she recanted when police arrived. And in 2013, Kolkema’s ex-wife filed a domestic assault complaint against him with police. She alleged that Kolkema shoved her in the back and knocked her to the ground during an argument. No charges were filed.

A court order bars Kolkema from being around the girlfriend’s 12-year-old daughter, but he was accused of spitting on the girl a few days before the belt incident, according to the Detroit Free Press. He was also accused of throwing a Gatorade bottle in their direction.