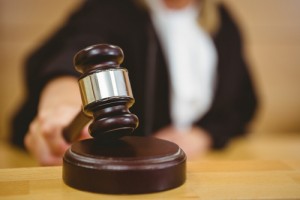 A judicial board has taken a first step to remove an Illinois judge convicted of mortgage fraud who refuses to resign.

The Illinois Judicial Inquiry Board filed a complaint on Tuesday against Judge Jessica Arong O’Brien of Cook County, report the Chicago Tribune and the Chicago Sun-Times. The complaint asks the Illinois Courts Commission to suspend O’Brien’s pay until a hearing on her removal.

The complaint says the Illinois Constitution bars O’Brien from judicial office because she is not currently licensed to practice law.

O’Brien’s law license has been temporarily suspended pending further disciplinary proceedings. Yet she has filed paperwork to seek retention as a judge in the November election, according to the judicial board.

O’Brien is paid more than $195,000 a year. She was switched to administrative duties after her April 2017 indictment, but a spokesperson for Cook County’s chief judge says O’Brien is no longer doing that work, according to the Sun-Times.

O’Brien was convicted in February based on allegations that she defrauded lenders a decade ago. She was accused of making $325,000 by selling two homes in 2007 to straw purchasers who later defaulted on mortgage payments, according to prior coverage by the Chicago Tribune.

O’Brien’s lawyer, Steve Greenberg, told the Tribune and Sun-Times that the courts commission doesn’t have jurisdiction because the conviction was for conduct that occurred before O’Brien became a judge. He also said there are post-trial motions pending and the court has not entered a final judgment.