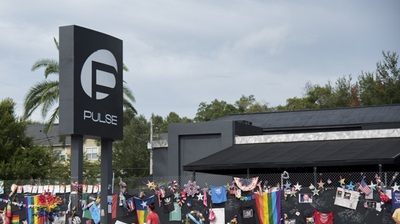 A memorial outside the Pulse nightclub in August 2016 in Orlando, Florida./John Panella (Shutterstock.com.)

Federal jurors in Orlando, Florida, on Friday acquitted the widow of Pulse Nightclub gunman Omar Mateen on a charge of aiding her husband in the June 2016 attack that left 49 people dead.

Jurors acquitted Noor Salman after deliberating more than 11 hours, report the New York Times, the Washington Post and the Orlando Sentinel. The 31-year-old was acquitted on charges of aiding and abetting a terrorist act and obstruction of justice. Her husband was killed by police after the mass shooting.

If Salman had been convicted, she would have faced a possible sentence of life in prison.

Defense lawyers had argued Salman gave a false confession to police after being questioned for 11 hours without a lawyer. She said she knew of her husband’s plans and had even helped him scout out the nightclub. The prosecution acknowledged the scouting trip didn’t occur. Cellphone records and receipts confirmed Salman was at the Florida Mall on the day in question.

Prosecutors also argued that extravagant spending and gun purchases by the couple before the shooting was evidence they were preparing for Mateen’s death.

Prosecutors also cited a text message Salman sent her husband hours before the attack in which she said he should tell his mother his friend had invited him out and she wanted to stay home. Prosecutors said Salman was developing a cover story for her husband, while the defense said she was concocting an excuse for not going to a mosque with Mateen’s family.