Justice Kennedy is said to be mulling retirement; will Roberts be the swing vote? 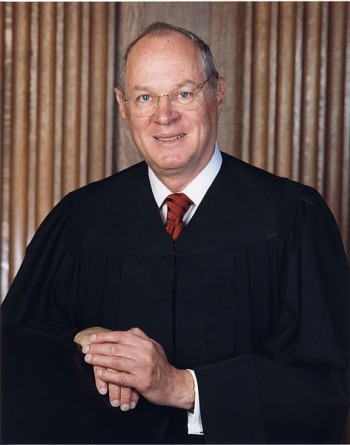 Justice Anthony M. Kennedy. Photo by collection of the Supreme Court of the United States, via Wikimedia Commons

According to CNN, former law clerks and others close to Kennedy say he is privately vowing to step down in the next few years. “The centrist conservative is the court’s most vacillating, agonizing, justice,” CNN reports, “and he is likely balancing his oft-voiced sense of judicial mission with the realities of age.”

If Kennedy leaves, Chief Justice John G. Roberts Jr. could be the court’s swing vote, according to a Los Angeles Times op-ed by University of California at Irvine law professor Richard Hasen.

“If progressives think the Supreme Court is conservative now, just wait,” Hasen writes. If President Donald Trump replaces Kennedy or one of the court’s liberals, there could be five votes to overturn Roe v. Wade, to strike down all affirmative action plans in public education, and to make it harder to challenge restrictive voting laws.

Rather than vote to overturn Roe, Roberts might instead “vote to kill it with 1,000 cuts rather than overturn it outright,” Hasen says. Politically, such a move might bolster Republicans by doing less to motivate apathetic liberals to go to the polls, he says.

Some have speculated that President Trump’s selection of Neil Gorsuch to fill the seat of Justice Antonin Scalia was intended to assuage any of Kennedy’s doubts about the quality of a possible successor should he decide to retire. Gorsuch is a former Kennedy clerk.

According to CNN, Trump “was effusive in his praise of Kennedy” during the ceremony in which Gorsuch took the judicial oath of office. There are ties between Trump and Kennedy, Politico reports.

Trump’s son Donald Trump Jr. knows Kennedy’s son, Justin, through New York real estate circles. Kennedy’s other son, Gregory, went to law school with a Trump adviser, Peter Thiel, and both were active in the Federalist Society. And when Ivanka Trump attended Supreme Court oral arguments, she was a guest of Justice Kennedy.

Some Trump officials have reportedly said Trump doesn’t feel bound to appoint another justice from the list he assembled before the selection of Gorsuch, according to the Politico article. One judge reportedly under consideration is Brett Kavanaugh of the U.S. Court of Appeals for the D.C. Circuit—who also is a former Kennedy clerk.

ABAJournal.com: “Ted Cruz predicts a Supreme Court vacancy by this summer; does he know something we don’t?”