Kavanaugh once questioned the Nixon tapes decision; was he espousing a 'unitary executive' theory? 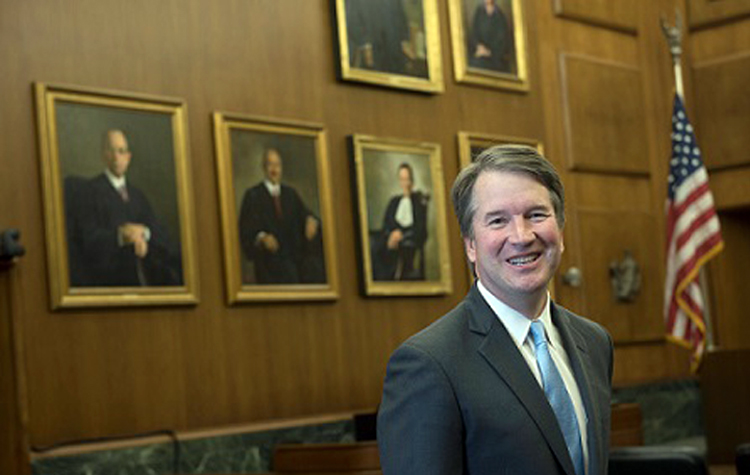 A transcript given to the Senate Judiciary Committee over the weekend reveals that Supreme Court nominee Brett Kavanaugh once questioned the unanimous 1974 U.S. Supreme Court decision that forced President Richard Nixon to turn over his secret White House tapes.

Kavanaugh’s remarks were made nearly 20 years ago during a lawyer roundtable, and he has since praised the United States v. Nixon decision for its display of judicial independence, report the Washington Post, Bloomberg News, the Associated Press and CNN. The Washington Lawyer had published a transcript of the 1999 panel discussion.

During the discussion, the lawyer who argued the case against Nixon, Philip Lacovara, said the 37th president had taken the position that the Constitution prevented anyone in the executive or judicial branch from challenging his decision to prevent release of the tapes to the special counsel investigating Watergate.

“This question is actually very interesting,” Kavanaugh had responded. Kavanaugh noted that lawyers for then-President Bill Clinton at the roundtable discussion had not questioned whether Nixon was correctly decided.

“But maybe Nixon was wrongly decided—heresy though it is to say,” Kavanaugh said. “Nixon took away the power of the president to control information in the executive branch by holding that the courts had power and jurisdiction to order the president to disclose information in response to a subpoena sought by a subordinate executive branch official. That was a huge step with implications to this day that most people do not appreciate sufficiently. … Maybe the tension of the time led to an erroneous decision.”

At another point in the discussion, Kavanaugh said, “I’m curious to know what people who are upset about the recent privilege rulings think about the Supreme Court’s ruling in Nixon. Should United States v. Nixon be overruled on the ground that the case was a nonjusticiable intrabranch dispute? Maybe so.”

Kavanaugh had worked for independent counsel Ken Starr, who had argued that Clinton could be impeached for lying to his staff and misleading the public.

Starr and two deputy counsels said in a statement on Monday that they had discussed the Nixon tapes case with Kavanaugh several times and he “viewed that decision as one of the most important decisions in Supreme Court history.”

Starr said Kavanaugh’s view was consistent with articles “published in 1998 (when he wrote that Nixon should be followed by the Supreme Court), in 2014 (when he identified Nixon as one of the ‘most significant cases in which the judiciary stood up to the president’), and in 2016 (when he called Nixon one of the ‘greatest moments in American judicial history’).”

Carrie Severino, chief counsel and policy director for the pro-Kavanaugh Judicial Crisis Network, made the same point in a National Review article. Kavanaugh had briefed and argued cases arguing that documents sought by the independent counsel were not covered by executive privilege, she said.

Severino also published an excerpt from a 2015 Kavanaugh speech at Catholic University’s Columbus School of Law. “As a judge, you must, when appropriate, stand up to the political branches and say some action is unconstitutional or otherwise unlawful,” Kavanaugh said. “Whether it was Marbury, or Youngstown, or Brown, or Nixon, some of the greatest moments in American judicial history have been when judges stood up to the other branches, were not cowed, and enforced the law. That takes backbone.”

Severino characterizes Kavanaugh’s comment in the roundtable as an argument that the Clinton legal team could not have prevailed absent an assumption that the Nixon case was wrongly decided.

But Lacovara told the Associated Press that Kavanaugh has long believed in a strong executive branch. “That was Brett staking out what has been his basic jurisprudential approach since law school,” Lacovara said of Kavanaugh’s comments publicized in 1999.

Kavanaugh’s comments were espousing a “unitary executive” theory in which the president holds all executive power, and doesn’t have to comply with a subpoena obtained by the special prosecutor—a subordinate executive branch official, according to a Slate article.

Slate points to a tweet by University of Texas law professor Steve Vladeck, who called Kavanaugh’s comments on the Nixon tapes decision “a big deal.” The argument that a quasi-independent prosecutor in the executive branch can’t sue to enforce a subpoena against a president “would surely cover” special counsel Robert Mueller, Vladeck said.

Vladeck elaborated in an interview with CNN. “This is not only another example of Judge Kavanaugh’s dogmatic view of presidential power, it is a remarkably narrow view of how much the president can be held to account,” he said. “The view that the case was wrongly decided would suggest that there is no mechanism in Kavanaugh’s view through which the executive branch can investigate the president.”

This is a big deal.

If Judge Kavanaugh thinks Nixon is wrongly decided (on justiciability), he’s effectively arguing that a quasi-independent prosecutor in the executive branch can’t sue to enforce a subpoena against a sitting President.

That would surely cover Mueller, too… https://t.co/kIWg27ZTo6

Atlantic: “Brett Kavanaugh Is Devoted to the Presidency”