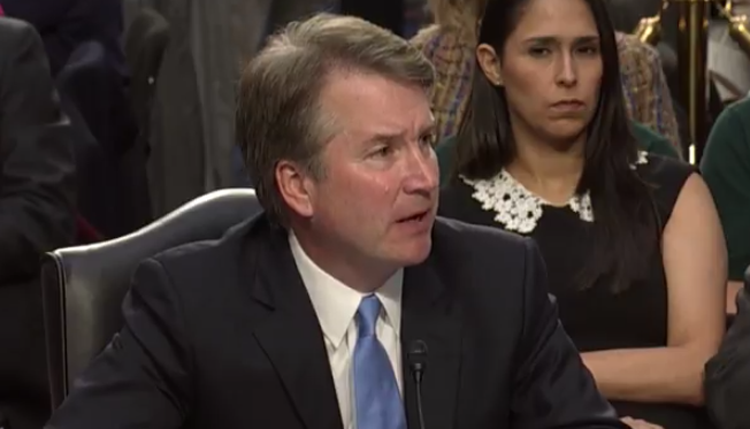 Lawyer Michael Avenatti has released an affidavit by a woman who says U.S. Supreme Court nominee Brett Kavanaugh was a “mean drunk” at house parties in the early 1980s, was physically aggressive toward girls and participated in efforts to get them drunk before gang rapes occurred.

Julie Swetnick says in the affidavit that she was gang raped at one of the parties. Swetnick says she was incapacitated and not able to fight off the boys, and believes she had been drugged with Quaaludes or something similar.

Swetnick doesn’t say Kavanaugh or his friend, Mark Judge, participated in her rape, but says she “became the victim of one of these ‘gang’ or ‘train’ rapes where Mark Judge and Brett Kavanaugh were present.”

In a statement, Kavanaugh called Swetnick’s allegations “ridiculous and from the Twilight Zone.” A judge on the U.S. Court of Appeals for the District of Columbia Circuit, Kavanaugh said he doesn’t know who Swetnick is and “this never happened.”

Kavanaugh is scheduled to testify Thursday before the Senate Judiciary Committee, which is considering his nomination. Also slated to testify is Christine Blasey Ford, who has alleged that Kavanaugh pinned her to a bed during a party in the 1980s when both were high school students, tried to pull off her swimsuit, ground himself on top of her, and covered her mouth. Ford says Judge was also present, but Judge is not scheduled to testify.

Judge told the Senate Judiciary Committee in a Sept. 18 letter conveyed by his lawyer that he did not wish to speak publicly, and wrote, “Brett Kavanaugh and I were friends in high school but I do not recall the party described in Dr. Ford’s letter. More to the point, I never saw Brett act in the manner Dr. Ford describes.”

In prepared remarks for the committee released Wednesday, Kavanaugh says he drank beer in high school and “sometimes had too many,” but he did not sexually assault Ford, report the Washington Post and TPM.

He also referred to “other false and uncorroborated accusations” that he labeled “grotesque and obvious character assassination.”

Swetnick says in the affidavit that she is a graduate of Gaithersburg High School in Gaithersburg, Maryland, and has active security clearances for work with the U.S. Mint, the Internal Revenue Service and the U.S. Treasury Department.

Swetnick says in the statement that Kavanaugh and Judge were present at the parties she attended, and she considered them “joined at the hip.”

“On numerous occasions at these parties,” Swetnick wrote, “I witnessed Mark Judge and Brett Kavanaugh drink excessively and engage in highly inappropriate conduct, including being overly aggressive with girls and not taking ‘No’ for an answer. This conduct included fondling and grabbing of girls without their consent.

“I observed Brett Kavanaugh drink excessively at many of these parties and engage in abusive and physically aggressive behavior toward girls, including pressing girls against him without their consent, ‘grinding’ against girls, and attempting to remove or shift girls’ clothing to expose private body parts. I likewise observed him be verbally abusive toward girls by making crude sexual comments to them that were designed to demean, humiliate and embarrass them. I often witnessed Brett Kavanaugh speak in a demeaning manner about girls in general as well as specific girls by name. I also witnessed Brett Kavanaugh behave as a ‘mean drunk’ on many occasions at these parties.”

Swetnick went on to say that she avoided drinking the punch at the parties because she had heard of efforts by Judge, Kavanaugh and others to spike the punch with drugs or grain alcohol “so as to cause girls to lose their inhibitions and their ability to say ‘No.’”

“I also witnessed efforts by Mark Judge, Brett Kavanaugh and others to ‘target’ particular girls,” Swetnick said, “so they could be taken advantage of; it was usually a girl that was especially vulnerable because she was alone at the party or shy.

“I also witnessed efforts by Mark Judge, Brett Kavanaugh and others to cause girls to become inebriated and disoriented so they could then be ‘gang raped’ in a side room or bedroom by a ‘train’ of numerous boys. I have a firm recollection of seeing boys lined up outside rooms at many of these parties waiting for their ‘turn’ with a girl inside the room. These boys included Mark Judge and Brett Kavanaugh.

“In approximately 1982, I became the victim of one of these ‘gang’ or ‘train’ rapes where Mark Judge and Brett Kavanaugh were present. Shortly after the incident, I shared what had transpired with at least two other people. During the incident, I was incapacitated without my consent and unable to fight off the boys raping me. I believe I was drugged using Quaaludes or something similar placed in what I was drinking.”

Below is my correspondence to Mr. Davis of moments ago, together with a sworn declaration from my client. We demand an immediate FBI investigation into the allegations. Under no circumstances should Brett Kavanaugh be confirmed absent a full and complete investigation. pic.twitter.com/QHbHBbbfbE