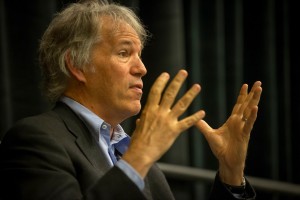 Early on during a rambling dialogue about the impact that television and other forms of entertainment are having on public perceptions of justice in the United States, David E. Kelley downplayed his role as one of the leading purveyors of TV shows about the law.

“I don’t delude myself that we’re doing great and important work,” said Kelley. “We make television shows.” Among Kelley’s achievements that landed him in the Television Academy Hall of Fame in 2014 are Boston Legal, The Practice and Ally McBeal.

But much of the discussion in the program that helped open the ABA Expo at the association’s annual meeting in San Francisco undercut Kelley’s professed modesty. And if anything, the lines between fact and fiction in how people view the legal system may be blurring more than ever.

“None of the law reviews or law libraries in the country have done what he accomplished with just one of those series,” said Jonathan Shapiro, who has written and produced several television shows about the law, including The Practice and Boston Legal. Kelley and Shapiro are co-executive producers of the upcoming eight-part series Goliath, which depicts the efforts of a down-and-out lawyer to seek redemption.

Prompted by questions from moderator Renee Montagne, a co-host of National Public Radio’s Morning Edition, Shapiro acknowledged that the public’s perception of the law has been influenced by what is known as the “CSI effect” stemming from a number of popular police procedurals on television.

Kelley concurred with that view. “You’re absolutely right—we take some license,” he said in response to a question from the audience about how legal programs depict the jury selection process. “We’ve heard the same thing about closing arguments. Litigation is a grinding, methodical process, and we put it through the time-warp machine to tell our stories.”

Kelley also conceded that his TV shows about the law have had some effect on the ethical integrity of the legal profession. “We definitely took some liberties with the rules of professional conduct,” he said, “but I don’t think we blazed the trail.” 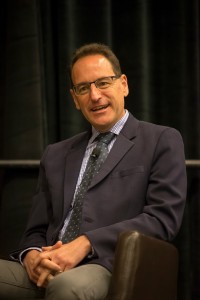 In addition to his work in television, Shapiro recently published his first novel, Deadly Force, the opener in a projected trilogy about the exploits of fictional federal prosecutor Lizzie Scott. Shapiro, who worked as a federal prosecutor after receiving his JD from the University of California at Berkeley, based Deadly Force on a case in which two police officers regularly beat confessions out of suspects. (Kelley also is a lawyer who received his JD from Boston University School of Law.)

It’s the kind of case that still makes today’s news headlines, said Shapiro. “Until we get a national standard of what constitutes deadly force and institute federal reviews of police shootings, this problem will continue,” he said. “The Black Lives Matter movement is incredibly important, but we need to look at the larger issues.”

The draw of stories about lawyers and the law is as old as the republic, Shapiro said. “Americans from the beginning of our culture have loved the law because it relates to all aspects of life, and there’s a wish fulfillment that law can help make society better.”

But lawyers need to do a better job of explaining their contributions to society, Shapiro said. “Lawyers have done a terrible job of telling their story,” he said. “Standing in front of a jury was still the most exciting thing I’ve ever done as a professional, and you wouldn’t be here if you didn’t love what you do.”