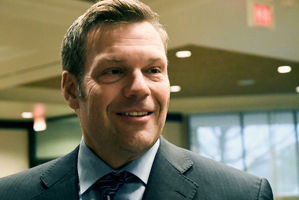 A federal judge has held Kansas Secretary of State Kris Kobach in contempt of court for failing to follow court orders after she barred enforcement of a law that required proof of citizenship when people registered to vote.

U.S. District Judge Julie Robinson of Kansas City, Kansas, held Kobach in civil contempt and ordered him to pay attorney fees to cover the cost of the sanctions motion. The New York Times, the Topeka Capital-Journal, the Associated Press, Courthouse News Service, the Kansas City Star and the Washington Post have coverage of Robinson’s order issued Wednesday. A press release from the American Civil Liberties Union, which filed the sanctions motion, is here.

Robinson had blocked enforcement of the Kansas law in 2016 as applied to people who tried to register to vote in federal elections when they applied for or renewed their driver’s licenses. The judge required Kobach to ensure that election officials sent notices to the would-be voters informing them that they are registered and eligible to vote. While those voters received one notice, some did not get the standard postcards with polling place information, Robinson said.

Robinson said she also made clear that Kobach must correct language on websites for the secretary of state to provide clear guidance for those seeking registration information. Yet an election manual with the wrong information was not updated on those sites, causing confusion for voters and county election officials, she said.

Kobach had argued that the election manual didn’t need to be updated because it only includes permanent changes in the law, while the court order was a temporary injunction. There was no need to change the manual until action by the U.S. Supreme Court, he had apparently argued at a conference among the parties. “This is part of the general theme of defendant’s compliance with the preliminary injunction order—that this court’s order is not ‘the law,’ ” Robinson wrote.

Kobach failed to take responsibility for violating court orders and failed to personally ensure compliance, Robinson said. Instead, Kobach “deflected blame for his failure to comply onto county officials, and onto his own staff, some of whom are not licensed attorneys,” the judge said.