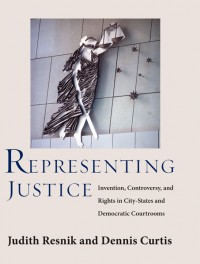 She has been depicted as a goddess of harmony and order in ancient Egypt, and as a sister, wife and counselor to Zeus, the New York Times reports. The blindfold did not become an accessory until well into the 17th Century, according to research by husband-and-wife Yale law professors Judith Resnik and Dennis Curtis.

Indeed, Lady Justice’s look “has been as changeable as a catwalk model’s,” the Times says. “She has strode forth naked and clothed, shoeless and shod, sword wielding and weaponless. She has been accompanied by a dog (for fidelity), a snake (for hatred) and a whole menagerie of other sidekicks that would befuddle the modern courthouse visitor.”

Resnik and Curtis devote a full chapter to blindfold history in their book, Representing Justice, the Times says. Using artists’ depictions of Lady Justice, they tell the story of how the judiciary has been central in the development of democracies and warn of the movement toward private adjudication.

The Times illustrates its story with an online slide show of various depictions of Lady Justice.