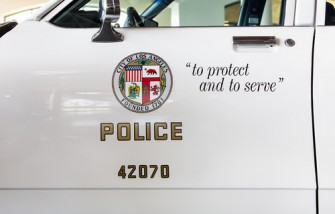 In a lengthy report, the Los Angeles Police Department found that more than a third of the people shot by its officers last year had documented signs of mental illness, and the number was three times that of the previous year, the Los Angeles Times reports.

The 300-page analysis released Tuesday also found that number of African-Americans shot by police officers continue to be disproportionately high—of 38 people shot in 2015, eight of them (21 percent) were black, though African-Americans compose about 9 percent of the city’s population.

LAPD Chief Charlie Beck told city officials that the report is a framework for a use-of-force dialogue among the Police Commission, the police department and the public.

“We’re more than willing to look ourselves in the mirror and say, ‘What’s occurring and how can we do better?’” Beck said.

The Times report noted that the findings offer a stark reminder of two problems that increasingly confront all law enforcement around the country: how to deal with growing numbers of the mentally ill, as well as healing strained relationships with the African-American community while blacks are shot in disproportionately high numbers.

When Beck began speaking at yesterday’s Police Commission meeting, which marked the anniversary of the shooting of a black man on skid row last year, activists stood and held signs with the man’s name—Charly “Africa” Keunang—and chanted “Can’t kill Africa!”

Keunang, who had spent years in a prison mental hospital, was confronted by police, grabbed a gun from a rookie police officer and was shot to death.

The city’s courts have seen a significant increase in mental health cases.

The police shootings report released Tuesday found that 14 of the 38 people who were shot had documented signs of mental illness. In addition, 22 of them were Latino—thus 58 percent of the total in a city where Latinos compose 48 percent of the population.

The LAPD already has begun increased use of less-lethal devices, requiring officers to carry Tasers and soon requiring them to keep bean-bag shotguns in the front of their patrol cars rather than in the trunk.

A senior staff attorney for the ACLU of Southern California, Peter Bibring, said the report’s numbers were troubling. “It’s not surprising that if the LAPD is disproportionately stopping and searching African-Americans that they are also disproportionately using force, including deadly force.”

Brittney Weissman, an executive director with the National Alliance on Mental Illness, said police officers need more de-escalation training, and the courts need diversionary programs for the mentally ill who are arrested.

Matt Johnson, president of the Police Commission, said the inspector general is expected to soon recommend strengthening police department policies for minimizing use of force.