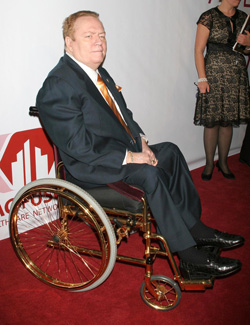 Hustler publisher Larry Flynt has spent decades in a wheelchair since being shot on March 6, 1978 as he stood on the steps of a Georgia courthouse in which he was facing an obscenity prosecution.

His admitted assailant, Joseph Paul Franklin, 63, has been convicted of racially motivated murders in multiple states and is scheduled for execution in Missouri on Nov. 20. But Flynt, who was reportedly targeted because Franklin objected to interracial sex photos in the men’s magazine, is trying to prevent that. Over the weekend, he joined forces with the American Civil Liberties Union in filing suit in federal court to seek more information about the state’s claim that an unidentified board-certified anesthesiologist will carry out the ultimate penalty, according to the Los Angeles Times.

An ACLU press release provides more information, including a link to the motion to intervene (PDF) filed Saturday by Flynt in the Western District of Missouri case. It argues on First Amendment grounds that documents about the lethal injection process to be used on Franklin should be made public.

“The state claims that its executions satisfy Eighth Amendment standards because their execution team includes a board-certified anesthesiologist,” said legal director Tony Rothert of the local ACLU chapter in a written statement provided to the LA Times.

“However, the American Board of Anesthesiology forbids its members from participating in capital punishment. If M3 is certified, it is only because the state is abetting him in hiding his identify from the board. The public should be skeptical of his testimony, but because his testimony is sealed, we do not even know what he said.”

The newspaper could not reach corrections department officials for comment.

Franklin was never prosecuted in the attack on Flynt and his lawyer as they were headed back to the Gwinnett County courthouse after lunch in 1978 and the misdemeanor obscenity case against the Hustler publisher there was dismissed after the shooting. A previous ABAJournal.com post gives details.

The Associated Press and the Missouri Times also have stories about the legal challenge to Franklin’s execution, and a guest column written by Flynt himself in the Hollywood Reporter provides more information about his views on Franklin’s case.