Firm's 'Ever Argue With a Woman?' Ad Provokes Debate on Stereotypes 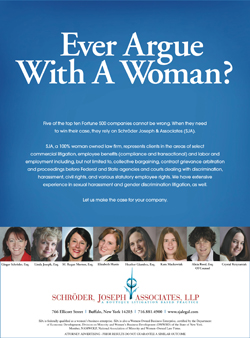 Updated: Do men and women argue differently? And does that make a difference in the way they work as lawyers?

That’s the suggestion of an ad by a women-owned Buffalo, N.Y., law firm that is attracting notice. Its headline: “Ever Argue With a Woman?”

The ad touts the strengths of the lawyers at Schroder Joseph Associates. Across the bottom of the ad are photos of the eight women, both lawyers and paralegals, who work at the firm. It is one of several in a campaign focusing on Schroder Joseph’s representation of employers on matters of employee benefits, labor and employment.

“Five of the top 10 Fortune 500 companies cannot be wrong,” the ad says. “When they need to win their cases they rely on Schroder Joseph & Associates.”

Name partner Ginger Schroder tells ABAJournal.com that the firm hopes to generate attention with its humorous ads. “They’re meant to create buzz about our practice,” she says.

The AdRants blog asserts that the “argue” ad highlights differences in the way men and women fight. “Ever notice how women, when in conflict with another, or with a man for that matter, discuss the issue at great length until every last feeling is expressed?” the blog says. “Ever notice how men, when in conflict with another (but not a woman), just punch each other, offer up a fist bump or brush it off with a ‘no worries, dude?’ “

The blog goes on to say that men are always out to win, while women are more predisposed to discussion and compromise, an important quality when it comes to setting legal cases.

Legal Blog Watch, on the other hand, wonders if the ad is really that effective, since it reinforces gender stereotypes for some readers. The blog says the ad apparently had that effect on AdRants, which relied on the ad to “jump to the conclusion that female lawyers are more likely to settle a case.”

The “Ever Argue With a Woman?” ad is not intended to take jabs at men, Schroder says. Critics are “taking themselves way too seriously. It was meant to be fun and thought-provoking; it’s not meant to engender national debate on gender stereotypes.” 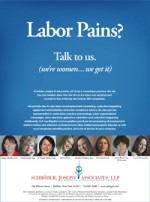 The ads were created by account executive Jennifer Dowdell of Business First magazine to aid the law firm’s branding effort. All use the same color background and the same photos of those who work at the firm: three partners, one associate and one of counsel, and three paralegals. Men have worked at the firm as law clerks, but so far none who have been offered jobs there has accepted.

The firm has so far received positive feedback from clients and others who think the ads are funny, Schroder says.

The first ad in the series reads: “Labor Pains? Talk to us. (We’re women … We get it.)” A second ad reads: “Sexual Harassment, Performance Issues, Discrimination, Dismissals and Disputes … (All in a day’s work for us.)”

A new ad scheduled to run reads: “Advice, Protection, Guidance and Support … When it comes to our clients, let’s just say our maternal instincts take over.”

Schroder says the ads are proof that lawyers can laugh at themselves. “A lot of people say lawyers don’t have a sense of humor,” she says. “I think that’s wrong.”

Corrected at 8:48 a.m. to say that the photos of the women at the law firm include lawyers and employees. Updated at 9:10 a.m. to include comments from Schroder.