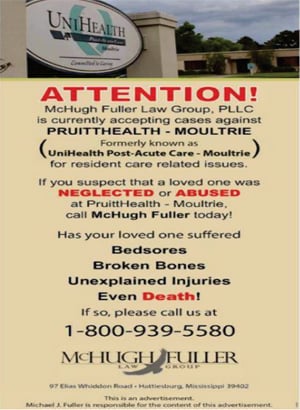 In a decision on Monday, the court lifted an injunction that had barred the ads by the McHugh Fuller Law Group, report the Daily Report (sub. req.), McKnights and the Albany Herald. The Legal Profession Blog and Bloomberg Big Law Business noted the decision (PDF), which included a copy of the ad on the second page.

The ad said McHugh Fuller was currently accepting cases against PruittHealth-Moultrie for issues related to resident care. The ad asks readers to call the firm if their loved one has suffered bed sores, broken bones, unexplained injuries and “even death!”

Pruitt Health had claimed the ad tarnished its trademark in violation of a state law barring the use of others’ trademarks when there is a likelihood of injury to business reputation. The Georgia Supreme Court found no violation in a unanimous opinion by Justice David Nahmias.

“Not every unwelcome use of one’s trademark in the advertising of another provides a basis for a tarnishment claim,” the supreme court said. “If PruittHealth believes that McHugh Fuller’s advertisements are untruthful or deceptive, the company must seek relief under some other statutory or common-law cause of action.”

The court said McHugh Fuller “was advertising what it sells—legal services, which are neither unwholesome nor degrading—under its own trade name, service mark, and logo, each of which appears in the challenged ad. No one reading the ad … would think that McHugh Fuller was doing anything other than identifying a health care facility that the law firm was willing to sue over its treatment of patients. In short, the ad very clearly was an ad for a law firm and nothing more.”