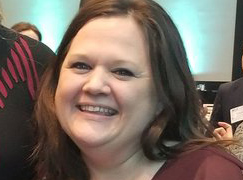 After a Thursday hearing with many questions centered on the substance abuse recovery of Tarra Simmons—a 2017 law school graduate who also has an addiction history, as well as prior theft and drug possession convictions—the Washington Supreme Court ruled that she can sit for the state bar.

The order (PDF), released Thursday evening, reverses an earlier 6-3 finding from the Washington State Bar Association Character and Fitness Board. Simmons, a Seattle University School of Law graduate who also received a Skadden Fellowship to help people recently released from prison, announced in May that she would appeal the character and fitness board finding.

Simmons, a mother by the age of 15 who also worked as a registered nurse for 11 years, has said that she became addicted to prescription drugs and methamphetamine after her father died, as self-medication for depression. In 2011, she was charged with felony theft, drug possession and gun possession. She pleaded guilty to the drug and theft charges and served 20 months in state prison.

“I am very grateful for my brilliant legal team and the community that came together to support me and take a stand for second chances. People do rehabilitate, and we must do more to remove barriers that keep people unable to fully reintegrate,” Simmons wrote in an email to the ABA Journal.

Shon Hopwood, a Georgetown University Law professor, argued Simmons’ appeal. Like Simmons, Hopwood also has a felony conviction and went to law school in the state of Washington.

Much of Hopwood’s opening statement centered on Simmons’ history. Simmons experienced trauma and sexual assault as a child, he said, and the first time she had treatment for that or for drug addiction was in prison.

At the hearing, the court noted that the character and fitness board’s majority finding said that Simmons gave them the impression that her application shouldn’t be questioned by the agency because she had received the Skadden Fellowship. Simmons mentioned the fellowship more than 30 times during the hearing, Jean McElroy, the Washington State Bar Association’s chief regulatory counsel, told the court.

“I wonder if you think it’s reasonable for when a person who as a child had been raped, sexually assaulted, homeless, on the streets, hungry and addicted to drugs finally gets a fellowship that gives her the opportunity to serve the people she wants to help … wouldn’t that be something you’re so very proud of, wouldn’t you want everybody to know? Might you mention it even 50 times?” Justice Mary Yu asked McElroy during oral arguments.

When Simmons announced that her application was denied by the state bar’s character and fitness board, the Skadden Foundation stated that Simmons could keep her fellowship, regardless of whether she was admitted to the bar.

“We are thrilled to be associated with Tarra and deeply believed in her from the minute we met her,” Susan Butler Plum, the director of the Skadden Foundation, wrote in a Thursday email to the ABA Journal. 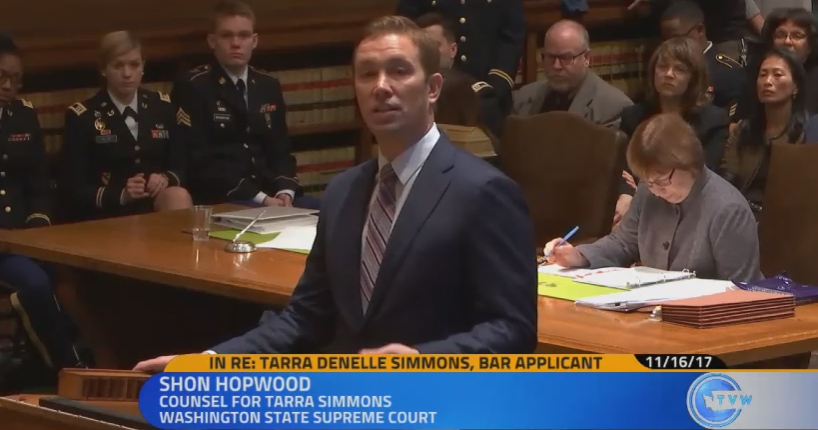 During the hearing, a fair amount of questions from the Washington Supreme Court justices centered on how long a bar candidate with prior convictions and an addiction history should be in recovery, to give the court a good sense of whether he or she will stay clean. Based on various studies, that generally would be five years, according to Hopwood.

“If the court were to set five years as a guideline, it would provide some sort of certainty to this process where currently there is none,” he said, adding that five years may not be enough for felons who engaged in long periods of fraud and don’t have histories of trauma and drug addiction.

Hopwood also expressed the importance of engaging in some sort of recovery support. While Simmons was in law school, she had various internships and externships, and lawyers who wrote character and fitness letters on her behalf noted that during stressful situations, she’d look to her recovery community for support.

In the Nov. 16 order, the Washington Supreme Court wrote that an opinion on matter is forthcoming.

Thomas Fitzpatrick, a Seattle attorney and a member of the ABA Center for Professional Responsibility, hopes that the court will address the time issue for recovery.

“We have been kind of fussing at the supreme court to give us some guidance in this area, maybe they are taking that to heart,” Fitzpatrick says. He adds that frequently, the Washington Supreme Court nixes character and fitness committee admissions recommendations without giving a reason.

“That’s been our big frustration. It’s not fair to people who will spend three years of time, effort and money to go to law school,” says Fitzpatrick, a partner with Seattle’s Talmadge/Fitzpatrick/Tribe.

According to him, most state courts have little guidance on the issue, and if the Washington Supreme Court adopts some sort of time standard for evaluating a JD candidate’s chances at staying in recovery, the finding would likely be used by other states as well.

Among people with addiction who try to stop using, in the first year approximately one-third are successful, says Patrick Krill, a lawyer and addiction counselor. After one year of abstinence, he adds, less than half are likely to relapse, and by five years, the chances of relapsing are less than 15 percent.

Working with the ABA and Hazelden Betty Ford, Krill was a co author on the 2016 study about lawyers and addiction that was published in the Journal of Addiction Medicine.

“I think the court reached the right decision, and it sends an important message to the profession that you can rehabilitate yourself, and if you take the matter seriously, there is a place for you in the legal community,” he said.