Law prof confesses: I am a sociopath 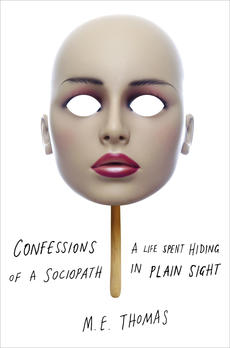 Cover of Confessions of a Sociopath,
published May 14.

Corrected: Could this have been written by one of your law professors? “Remorse is alien to me. I have a penchant for deceit. I am generally free of entangling and irrational emotions. I am strategic and canny, intelligent and confident, but I also struggle to react appropriately to other people’s confusing and emotion-driven social cues.”

The paragraph is published in a Psychology Today article by an author who says she is a law professor and a diagnosed sociopath. Above the Law notes the “truly chilling article,” but blogger Elie Mystal opts to turn “the snark meter way down on this post because, well, I don’t want to be murdered.”

The article is adapted from a memoir released on May 14, called Confessions of a Sociopath: A Life Spent Hiding in Plain Sight, written under the pseudonym M. E. Thomas.

Thomas writes that she has never murdered anyone (though she certainly wanted to), nor has she spent time in jail. She is a Sunday school teacher in a church that teaches it is actions, rather than thoughts, that count. She admits to good actions, such as buying a house for her closest friend, as well as bad, including setting up a rival for disappointment in a relationship and beating a childhood friend.

Before becoming a trial lawyer, the author says she prosecuted misdemeanors in the District Attorney’s office and was an associate in a law firm. “My sociopathic traits make me a particularly excellent trial lawyer,” Thomas writes. “I’m cool under pressure. I feel no guilt or compunction, which is handy in such a dirty business. Misdemeanor prosecutors almost always have to walk into a trial with cases they’ve never worked on before. All you can do is bluff and hope that you’ll be able to scramble through it. The thing with sociopaths is that we are largely unaffected by fear. Besides, the nature of the crime is of no moral concern to me; I am interested only in winning the legal game.”

Thomas says she was not a victim of child abuse, though she grew up in a family “with a violent father and an indifferent, sometimes hysterical, mother. I loathed my father. He was phenomenally unreliable as a breadwinner, and we often came home to find the power shut off because we were months behind in our electricity bill. He spent thousands of dollars on expensive hobbies, while we were bringing oranges from our backyard to school for lunch. The first recurring dream I can remember was about killing him with my bare hands.”

Edited at 5:43 p.m. to correct the title of the book, which was an editor’s mistake.