Law prof proposes law to shut down ISIS recruitment online; is it constitutional? 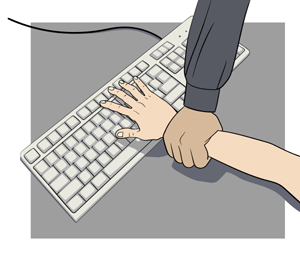 Donald Trump’s search for “brilliant people” to help him close the Internet to ISIS could extend to University of Chicago law professor Eric Posner, who proposes a new law to clamp down on ISIS recruitment.

The law—which is likely unconstitutional under modern precedent—would make it a crime to access websites that glorify or support ISIS, Posner writes in an article for Slate.

At the debate Tuesday, Trump said ISIS is recruiting through the Internet, and he would like to “get our brilliant people from Silicon Valley and other places and figure out a way that ISIS cannot do what they’re doing.

Asked if he would close parts of the Internet, Trump replied: “I would certainly be open to closing areas where we are at war with somebody. I sure as hell don’t want to let people that want to kill us and kill our nation use our Internet.”

Eric Posner also likes the idea of protecting America’s youth from ISIS. In his Slate column, Posner said his proposed law would make it a crime to “access websites that glorify, express support for, or provide encouragement for ISIS or support recruitment by ISIS; to distribute links to those websites or videos, images, or text taken from those websites; or to encourage people to access such websites by supplying them with links or instructions.”

The law would have graduated penalties, beginning with a warning letter and imposing fines or prison time for subsequent violations. “The idea would be to get out the word that looking at ISIS-related websites, like looking at websites that display child pornography, is strictly forbidden,” the law professor writes.

The law could include exemptions for legitimate ISIS-related research by journalists, academics, private security agencies and others, Posner says.

Posner acknowledges potential First Amendment problems based on Supreme Court precedent that allows bans on political speech only when it poses an immediate threat to public safety. That precedent was adopted in the 1960s. Before that, Posner says, people could be prosecuted for “dangerous speech.”

“The U.S. government prosecuted Nazi sympathizers during World War II,” Posner writes, “draft protesters during World War I, and Southern sympathizers in the Union during the Civil War. It’s common sense that when a country is embroiled in a war, it should counter propaganda that could populate a fifth column with recruits. The pattern in American history—and, in the other democracies as well, even today—is that during times of national emergency, certain limits on speech will be tolerated.”

Though the United States is not engaged in war or a national emergency, Posner says, anti-propaganda laws may be warranted because the Internet “has given rise to a historic and unprecedented danger from foreign radicalization and recruitment.”

Posner suggests the courts could modify the current test for free-speech violations and replace it with a balancing test. Such a test could be used to uphold laws targeting dangerous speech that doesn’t advance public debate, he says.

A law like the one he proposes would reduce “the ranks of homegrown jihadis,” enhance public safety and protect impressionable youths “from the virus of ISIS’s ideology,” Posner writes.