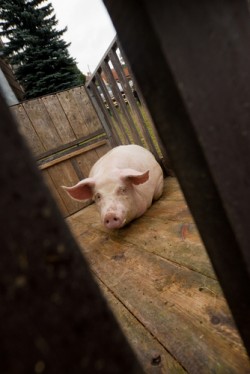 Such laws, proposed or enacted in about a dozen states, are supported by the agricultural industry, Purdy writes in an op-ed for the New York Times. The industry argues the videos can unfairly portray its activities and can endanger the people who make them, some of whom are trespassers and some of whom are employees going beyond the terms of their employment.

Purdy acknowledges that fairness and safety are real issues. “So is transparency,” he writes, “and that is why we should require confined-feeding operations and slaughterhouses to install webcams at key stages of their operations. List the URLs to the video on the packaging. There would be no need for human intrusion into dangerous sites. No tricky angles or scary edits by activists. Just the visual facts. If the operators felt their work misrepresented, they could add cameras to give an even fuller picture.”

Such laws could be enacted, he suggests, through ballot initiatives. Success in a few states could lead to transparency that would change the public discourse, he says.

“Slaughterhouse cameras might seem unfair to the operators,” Purdy writes. “The images might still appeal to emotion and prompt visceral revulsion. Fair enough. But we are not going to decide how we should treat animals through cold reason alone, and certainly not if their treatment is invisible.”