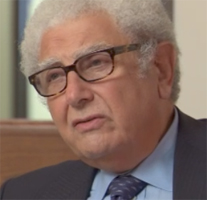 Updated: M. Cherif Bassiouni, a human rights advocate and former DePaul University law professor, has died at the age of 79.

Bassiouni died Monday at his Chicago home, the Chicago Sun-Times reports. He had multiple myeloma.

The Sun-Times calls Bassiouni “a champion of human rights who fought torture, war crimes and genocide around the globe.”

Bassiouni helped establish the International Criminal Court, assisted in the Camp David peace accords, and helped document atrocities, according to the Sun-Times and a 2007 DePaul press release. Some referred to Bassiouni as “the father of international criminal law” for his work investigating war crimes in Yugoslavia, Rwanda, Afghanistan, Iraq and Libya, WTTW reported in 2011.

Former ABA President Michael Greco chairs the project’s board of advisors. He says Bassiouni was the first person he called when the ABA Center for Human Rights decided to create the project. Bassiouni was instrumental in recruiting board members, including retired Justice Sandra Day O’Connor.

Bassiouni grew up in Cairo as the son of an Egyptian diplomat. Bassiouni told WTTW in 2011 that he first learned about Adolf Hitler at the age of 6 when he overheard a conversation in 1943 between a Jewish man and his Muslim father.

Bassiouni said he “sort of eavesdropped on the conversation, about people being taken to gas chambers, and—and people massively killed. As a child, it really shocked me.”

Later that week, Bassiouni aimed a toy gun at German planes during an air raid over Cairo. He told his mother he wanted to shoot down “Uncle Hitler,” the “bad man.”

“In a strange way, getting at the bad ‘Uncle Hitler’ has been the motor of my life,” he told WTTW.

Updated on Sept. 28 to include Bassiouni’s work on the ABA’s International Criminal Court Project.