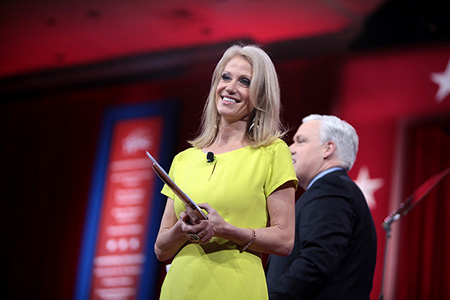 The law professors made the request in a letter to the Office of Disciplinary Counsel in Washington, D.C., the Washington Post reports. Conway, counselor to the president, is a member of the D.C. Bar under her maiden name, but she has been suspended for not paying her dues, the letter says.

The letter cites an ethics rule that bars misconduct that involves dishonesty, fraud, deceit or misrepresentation. The authors argue that lawyers in public office have a higher obligation to comply with the rule. The letter lists these incidents of alleged misconduct:

• Conway has referred to the “Bowling Green Massacre” to justify President Donald Trump’s executive order barring entry into the United States of immigrants from seven majority-Muslim countries. There was no such massacre.

• Conway told MSNBC that former President Barack Obama had “banned” Iraqi refugees from entering the United States for six months after the Bowling Green Massacre. In reality, Obama ordered enhanced screening procedures and did not impose a formal ban after the arrest of two Iraqis in Kentucky for trying to send weapons and money to al-Qaida, the letter says.

• Conway said the White House had provided “alternative facts” about the number of people who attended the inauguration. “ ‘Alternative facts’ are not facts at all; they are lies,” the letter states.

“We do not file this complaint lightly,” the letter says. “In addition to being a member of the D.C. Bar, Ms. Conway is a graduate of the George Washington University Law School, one of the District’s premier law schools. We believe that, at one time, Ms. Conway understood her ethical responsibilities as a lawyer and abided by them. But she is currently acting in a way that brings shame upon the legal profession.”

Among the law professors who signed the letter are Abbe Smith of Georgetown University, Lawrence Fox of Yale University, Russell Pearce of Fordham University, and Ellen Yaroshefsky of Hofstra University.

Hat tip to Paul Alan Levy’s Blog, which views the complaint as a threat to the First Amendment. “In our society, the remedy for false political speech is more speech, not a government proceeding to determine the truth and punish those found to have lied,” the blog says.