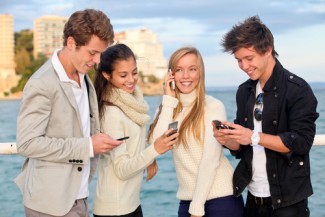 Researchers pondering the reason for a one-third drop in the crime rate during the 1990s have suggested a number of reasons why. Perhaps the drop was because of more police on the street, they argued, or more criminals in prison, or changes in the market for crack cocaine. Or maybe there are fewer criminals because of school desegregation, lower lead exposure in children, or a lower incidence of fetal alcohol syndrome.

“Given that mobile phones increase surveillance and the risks of apprehension when committing crimes against strangers,” the professors write, “an expansion of this technology would increase the costs of crime as perceived by forward-looking criminals.” The devices allow for quicker reporting of crimes and, in some cases, instant communication of details, they point out.

Cellphones became more popular in the mid-1990s, the same time that the crime rate began to drop. The authors analyzed state violent crime rates and mobile phone subscriptions and found that higher mobile phone use is strongly correlated with reduced violent crime.

The finding “implies that there may be relatively cheap alternatives to putting cops on the street in order to fight crime,” the authors say. “In particular, our findings points to private solutions to deter crime.”