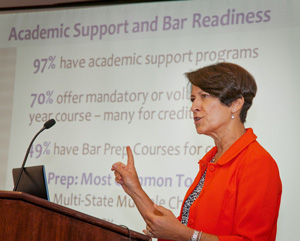 Today’s law school curriculum looks nothing like the one you probably had when you went to law school 10, 20 or 30 years ago, a new survey shows.

Law schools have dramatically increased all aspects of skills instruction–including clinical, simulation and externships–in the wake of a 2004 change in law school accreditation standards requiring that students receive “substantial instruction” in skills generally regarded as necessary for effective and responsible participation in the legal profession, according to the survey, conducted by the curriculum committee of the ABA Section of Legal Education and Admissions to the Bar.

Legal research and writing also continues to grow in stature, according to the survey, as law schools have increased the number of units and expanded course coverage to include skills instruction beyond traditional advocacy.

Distance education options are also expanding, although fewer than half of law schools surveyed in 2010 allowed online courses to count towards a JD.

Those are just some of the key findings in the section’s first empirical survey of law school curricula since 2002, the results of which were detailed in a presentation Saturday at the ABA Annual Meeting by Southwestern Law School professor Catherine Carpenter, who chairs the section’s curriculum committee. An executive summary of the survey results was released last month.

Carpenter said there’s been lots of talk about what’s been happening with the law school curricula in the legal community. But objective data, like that contained in the survey, is hard to come by, she said.

If the survey has one overarching theme, she said, it is that law school curricular trends are not your father’s Chevrolet. “It’s not yours, either, if you went to law school in 2000,” she said.

The survey, which covers all aspects of the law school curricula, from graduation requirements to narratives from law school officials on the influences that inspired curricular changes, is for sale on the section’s website for $49.95.