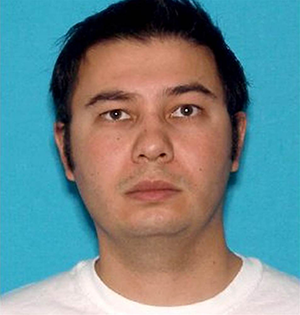 Image of Matthew Riehl from the Douglas County Sheriff’s Office.

Officials at the University of Wyoming College of Law had asked students to be on the lookout for one of its graduates, Matthew Riehl, less than two months before he opened fire on several deputies in suburban Denver.

The school was concerned about Facebook posts by Riehl targeting UW law professors, including one post in which he said he dreamed about raping a former professor, according to Fox31.

Riehl had graduated from the law school in 2010 and received a license to practice law in Wyoming in May 2011. He initially practiced in a law firm in the town of Rawlins, Wyoming, then opened his own law practice, according to AP. He voluntarily withdrew from the bar in October 2016.

Riehl was in Iraq from April 2009 to March 2010. His mother has said he had post-traumatic stress disorder.

Riehl had escaped from a veterans’ mental health ward in 2014 where he was being treated for a psychotic episode, according to a report obtained by the Denver Post. He was located and returned to the facility, where he was placed on a 72-hour mental health hold.

The University of Wyoming College of Law had warned students in a Nov. 6 email to be on the lookout for Riehl and to immediately notify campus police if he was seen on campus. The email said the UW law school had received information about “suspicious behavior” by Riehl.

University of Wyoming spokesman Chad Baldwin told Law.com that campus police had increased security at the school because of Riehl’s social media posts and had warned police in Colorado about him.

Baldwin said Riehl was on the honor roll in 2007, but faculty had identified him as a troubled student. Baldwin also said the school had investigated a harassment complaint against Riehl when he was a student but found the evidence insufficient for action.

The harassment allegation might have been related to an incident in which Riehl allegedly left douche in the study carrel of a student who made a comment that irked Riehl, according to Charles Pelkey, a state lawmaker and lawyer who attended law school with Riehl. He spoke with Law.com about the incident.

Pelkey said the social media posts regarding the law school were, “really vulgar and awful, and just fairly alarming in terms of his mental health.”

Updated on Jan. 4 to fix a typo in a reference to the school investigating Riehl for harassment when he was a student.