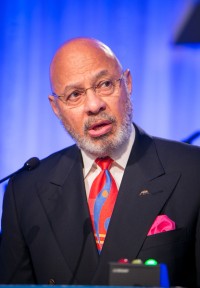 Former ABA president Dennis Archer, who is also chair of the Task Force on the Financing of Legal Education. Photo by ©Kathy Anderson.

The ABA House of Delegates on Tuesday adopted the recommendations of the Task Force on the Financing of Legal Education in its passage of Resolution 110 (PDF).

“We believe this is a proper path forward,” he said.

The task force, which spent a year examining the financial realities of becoming a lawyer, made five recommendations, three of which would still require the approval of the ABA Section of Legal Education and Admissions to the Bar, which accredits U.S. law schools. It said law schools should provide students with better debt counseling, disclose more information about revenues and expenditures, and experiment with new ways to lower the costs of a legal education. It also said that all actors in the student loan business should publish “plain English” versions of various student loan and repayment programs and that the council should make public all of the information it has on legal education going forward.