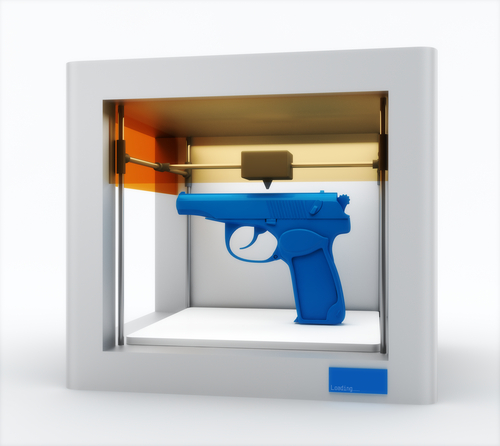 Beginning Aug. 1, a Texas company will be able to publish its blueprints to make guns from 3D printers without fear of reprisal by the U.S. State Department.

Defense Distributed will be able to publish the blueprints as a result of a June 29 lawsuit settlement with the federal agency, report Wired, Vice News, the San Jose Mercury News, the New York Times and USA Today. Josh Blackman’s Blog posted a press release.

The State Department had warned company chief Cody Wilson in 2013 that he could go to jail for violating federal export controls after he published blueprints for a 3D pistol called “The Liberator”. Defense Distributed had claimed in its 2015 suit that the State Department violated the company’s First Amendment rights by trying to control its online speech under a federal law controlling exports of military articles.

Wilson is a former University of Texas law student. He told Vice News he is a “crypto-anarchist” who sees his blueprints as paving the way for the death of gun control in America. The government won’t be able to trace 3D guns because they won’t have a serial number and people who buy them generally won’t have to undergo background checks.

Defense Distributed will be offering several blueprints, including guides for making AR-15-style rifles. The guns are made from plastic but have a metal firing pin because of a requirement for metal that will set off detectors in the Undetectable Firearms Act, according to Vice News.

Wilson had sued with the help of the Second Amendment Foundation. A federal judge in Wilson’s case had refused to grant a preliminary injunction that would have allowed him to keep the blueprints online, a decision upheld by the New Orleans-based 5th U.S. Circuit Court of Appeals.

The State Department agreed to settle the case “seemingly out of the blue,” according to Vice News. The government also agreed to pay nearly $40,000 for Wilson’s legal fees.

The government is also planning to change the export control rules for any firearm below .50 caliber and move their regulation to the U.S. Commerce Department, which has a simpler licensing procedure for exports.

Several amici took Wilson’s side, including the Electronic Frontier Foundation. Senior staff attorney Kit Walsh told the Mercury News that the issue wasn’t about whether it’s a good thing for people to be able to make guns. “Rather, the issue was whether the government’s process for banning and permitting online speech had adequate safeguards,” Walsh said.

Updated with subsequent coverage on July 27.