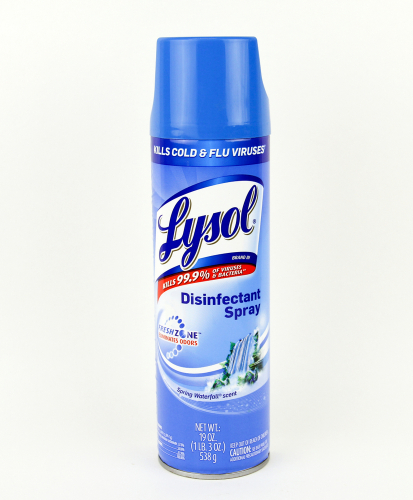 A Louisville, Kentucky, lawyer was arrested Wednesday for allegedly attacking another attorney with a Lysol can in a courthouse conference room.

Lawyer Lindsey Scott, 63, was charged with second-degree assault for allegedly entering the conference room and hitting lawyer James “J.R.” Moore in the head with the can, report the Louisville Courier Journal, WAVE News and WDRB.

The Jefferson County Sheriff’s Office said Scott attacked Moore after an altercation. But Moore wrote on Facebook that there was no fight.

“I was totally blindsided while peacefully eating breakfast,” Moore wrote. “First thing I felt was a thud. Just a scalp wound. My friends need not be concerned.”

Moore went to the hospital for treatment while Scott was hospitalized after complaining of chest pains.

Moore told WAVE 3 that he had to get about a dozen staples for his cuts.

Lawyers told WAVE 3 that both lawyers are well-known and liked. Lawyers said Scott was motivated to become a lawyer after he was charged and eventually acquitted in the military justice system.

Scott had been accused of the rape and attempted murder of the wife of a fellow Marine in 1983. His first conviction was overturned due to ineffective assistance of counsel, and he was acquitted on all counts in a retrial.

The case was later chronicled in a TV movie that focused on the civil rights lawyer who won Scott’s acquittal.