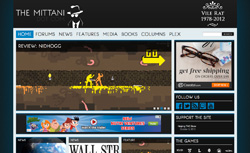 Lawyer Alex Gianturco focused on white-collar crime cases when he worked at Zuckerman Spaeder, but he had a parallel life as a galactic overlord in the space-combat game “EVE Online.”

Gianturco preferred life in the virtual universe and left the law firm three years ago, the Wall Street Journal (sub. req.) reports. In 2012 he launched a website, TheMittani.com, which tracks the action of EVE Online, earning a “comfortable income” from online ads and other marketing, the story says.

“First Alex Gianturco conquered the universe,” the Wall Street Journal says. “Then he launched a website to make some money from it.”

TheMittani.com is named after Gianturco’s online character, now the most powerful among the game’s half a million players. Gianturco created the website after a dustup at a 2011 gaming conference when he “arrived inebriated and berated another player,” the story says. Though he apologized and turned over his virtual fortune to the player, blogs continued to criticize Gianturco and his character.

TheMittani.com was Gianturco’s response to the criticism. It now covers other games as well, as well as real-life science news.

Next:
Chief justice asks no questions in challenge to abortion-clinic buffer zones