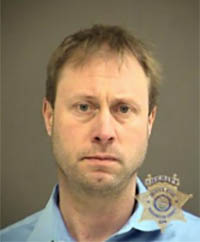 A lawyer arrested for allegedly firing several shots at the office of an Oregon attorney is facing new charges stemming from a search of his home in Vancouver, Washington.

The lawyer, 43-year-old Erik Graeff, is accused of manufacturing methamphetamine, report the Columbian and the Oregonian. Graeff practices law in Portland, Oregon, but lives in Washington.

A probable cause affidavit said police searched Graeff’s home on Feb. 28 and found what they believed to be a basement meth lab. Police found chemicals, glass cookware, heating plates and a glass jar that contained meth. They also found several boxes of pseudoephedrine and a computer with notes and videos on how to produce drugs, the affidavit said.

Graeff was charged with unlawful use of a weapon and reckless endangerment of another person in connection with the law office shooting on Dec. 21. Police allege Graeff shot at the law office of Terrence Hogan in Beaverton, Oregon, after an escalating dispute that began with a voicemail from Hogan telling Graeff he didn’t approve of his work on a case.

An exchange of emails followed. Hogan told Graeff he would have to explain his conduct to bar officials. Graeff responded that he is tougher than Hogan and the state bars. Hogan responded, “You know where I am, tough guy.”